In its place at the foot of the Preseli hills, the small village of Brynberian stands sheltered and independent just off the B4329 on the road to Pentre Ifan. But many of its dwellings are scattered,  hidden from the road down unmarked tracks or amongst ancient woodland. And then there are the farms, a constant reminder of the continuing traditions, busy all year with sheep or cattle and the sound of sheepdogs about their business. Apart from the Canolfan, at the edge of village but at the heart of the community, there are no modern ‘facilities’: they are long gone to nearby settlements. The riches of Brynberian lie in its multi-cultural community, its history, geology and legend. The rest – and other riches – can be found in the surrounding villages, some of them outlined here. From  Ogham inscriptions, Celtic crosses, medieval churches and pottery kilns, to shire horse farms with royal connections; from coal mining remains and drovers’ roads to cheese and candlemakers, and from the home of the resurgence of self-sufficiency to the village offering crempog, cawl and, yes, pizza, Brynberian’s neighbouring settlements have different but valuable things to offer the visitor…

With a population of 731 (2011) and situated 7 miles from Brynberian south of the Preseli hills on the B4313, Maenchlochog has roots in prehistory and is mentioned on a 1583 parish map of Pembrokeshire. It is now a thriving village with two general stores, two garages, a pub, a cafe, a small art gallery,  a Welsh-medium Primary School, Tabernacl chapel and, at its centre, the Anglican Church of Saint Mary (Eglwys Fair), which is medieval in origin. 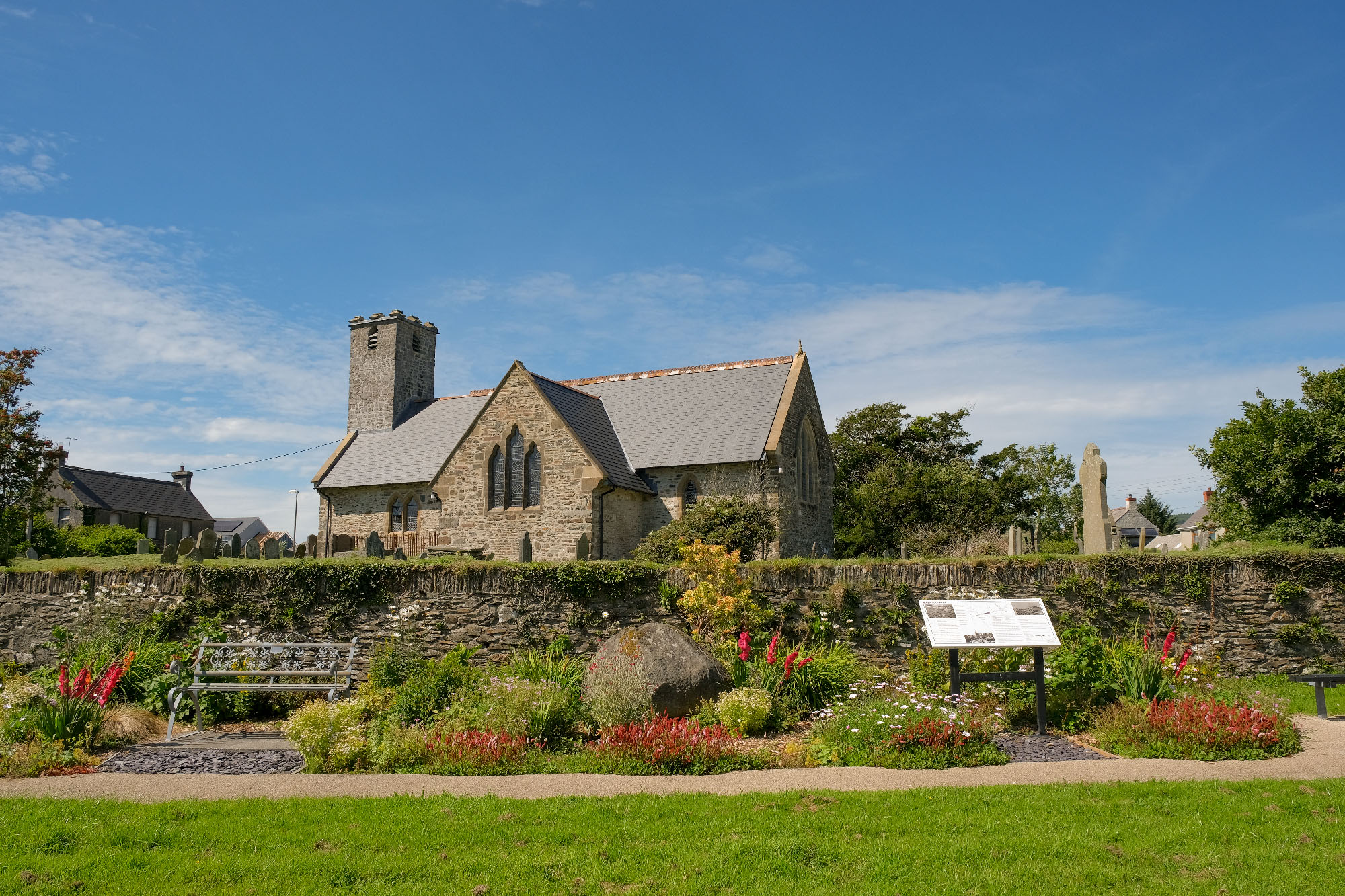 Its name is probably Irish in origin (there having been Irish migration to Pembrokeshire in the Middle Ages), “clochog” referring to a ‘craggy place’ in Irish which would well describe the surrounding terrain. However, local tales reports that there were stones near Ffynnon Fair to the south of the village, which rang like bells when struck, but these were blown up by treasure-hunters, in the mistaken belief that they concealed a golden treasure –  maen (“stone”) and clochog (“noisy, clamorous”). A castle, recently excavated in the car park, was built in the early 12th century during a period of Norman-sponsored settlement.

A railway, built to transport slate from the nearby village of Rosebush, reached Maenclochog in 1876 and was extended to Fishguard in the 1890s. There were several small quarries near the village and in the late 1870s an attempt was made to develop Rosebush as a spa holiday retreat. To this end the Prescelly Hotel was built, along with ornamental lakes to attract visitors. The venture failed but Tafarn  Sinc , named for its corrugated galvanised iron construction, remains and is now a community-owned popular tourist watering hole, complete with a reconstructed railway station scene in its grounds. And if cheese is your thing, Pant Mawr Farm, almost next door, produces and sells a variety of interesting cheeses from the premises (which also doubles as the Post Office on designated days pantmawrcheeses.co.uk). 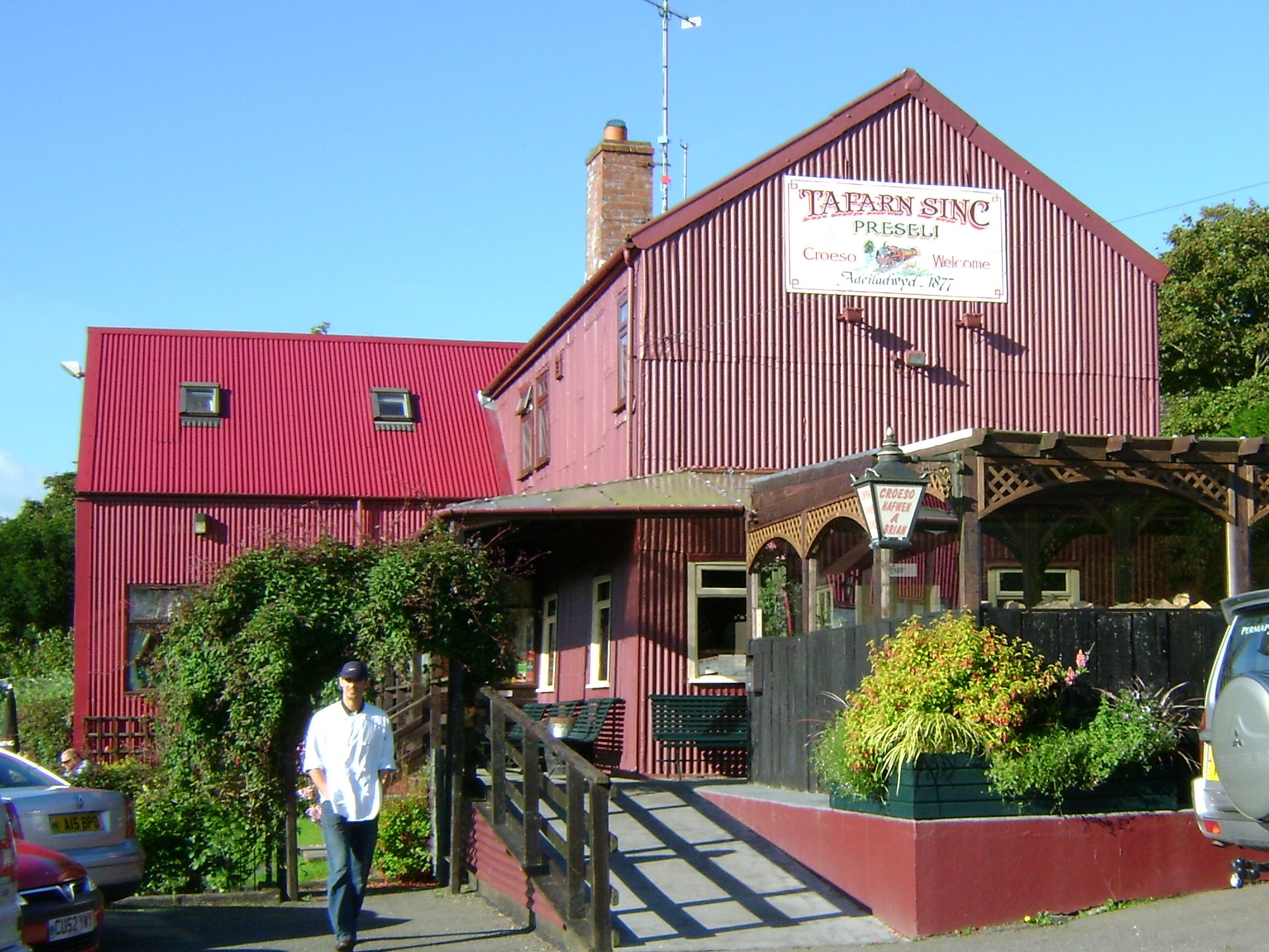 Following World War Two, the War Office sought to take over 16,000 acres of the Preseli slopes as a permanent military training ground, since during the war British and US troops had used the area for training. Had it not been for a strong campaign led by local Non-conformist ministers and teachers of the Prescelly Preservation Committee, Maenclochog would be a garrison village today. A memorial to Joseph James, one of the leaders of the campaign, is visible from the mountain roadside with an inscription from the renowned local poet, Waldo Williams.

Until the late 1940s, monthly fairs were held in the village centre. The September Hiring Fair, where farmers would hire workers for the coming year, would last two days and would attract both local traders and those from far afield. Drovers would herd their animals to Narberth but, with the advent of the railway, buyers could transport their stock from the station as far as the English border and beyond.

Three miles west of Brynberian with a population of 704, Eglwyswrw lies at the junction of the A487 and B4332. Brynberian is administratively linked to this larger village, as it is part of Eglwyswrw Community Council.

With church records dating from Norman times, the village is marked on a map of 1578 in the British Library. More recently, in 2004, the village name was featured in Eurotunnel adverts in France referring to its ‘unpronounceable name’. And in January 2016 it was awarded the dubious accolade of being the wettest village in Britain for 92 years, having had 85 consecutive days of rain. 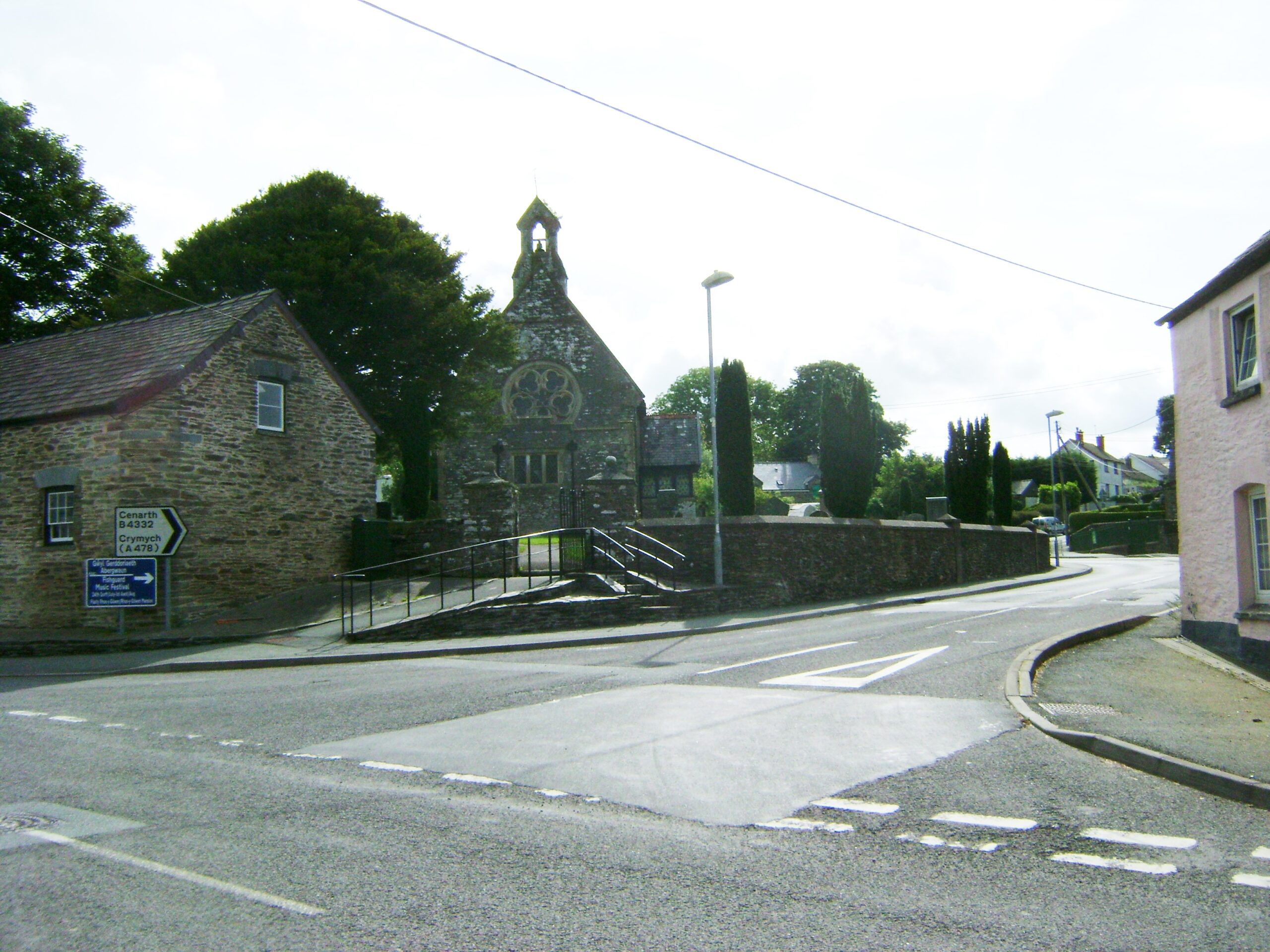 There is a small Norman motte on the west side of the village and the restored nineteenth century Church of Saint Cristiolus stands in the Centre. The Serjeant’s Inn, now a private house, is an eighteenth-century coaching inn, once an important staging post. It also housed the local petty sessions. The village also hosted several important fairs, most notably Fair Feigan from the eighteen hundreds.

The Dyfed Shire Horse Farm is a popular attraction, having royal connections in providing horses for military parades and the Household Cavalry.

A mile south on the A487, its dwellings visible from the road, is Castell Henllys, a reconstructed Iron Age hill fort. One of the most studied hill forts in Britain, archaeologists have found evidence of numerous Iron Age roundhouses dating from 500 to 100 BC and a farmstead believed to have been occupied through the Romano-British period. Managed now by Pembrokeshire Coast National Park, there is an interesting Visitor Centre and trails through the surrounding Pengelli woods (www.castellhenllys.com). 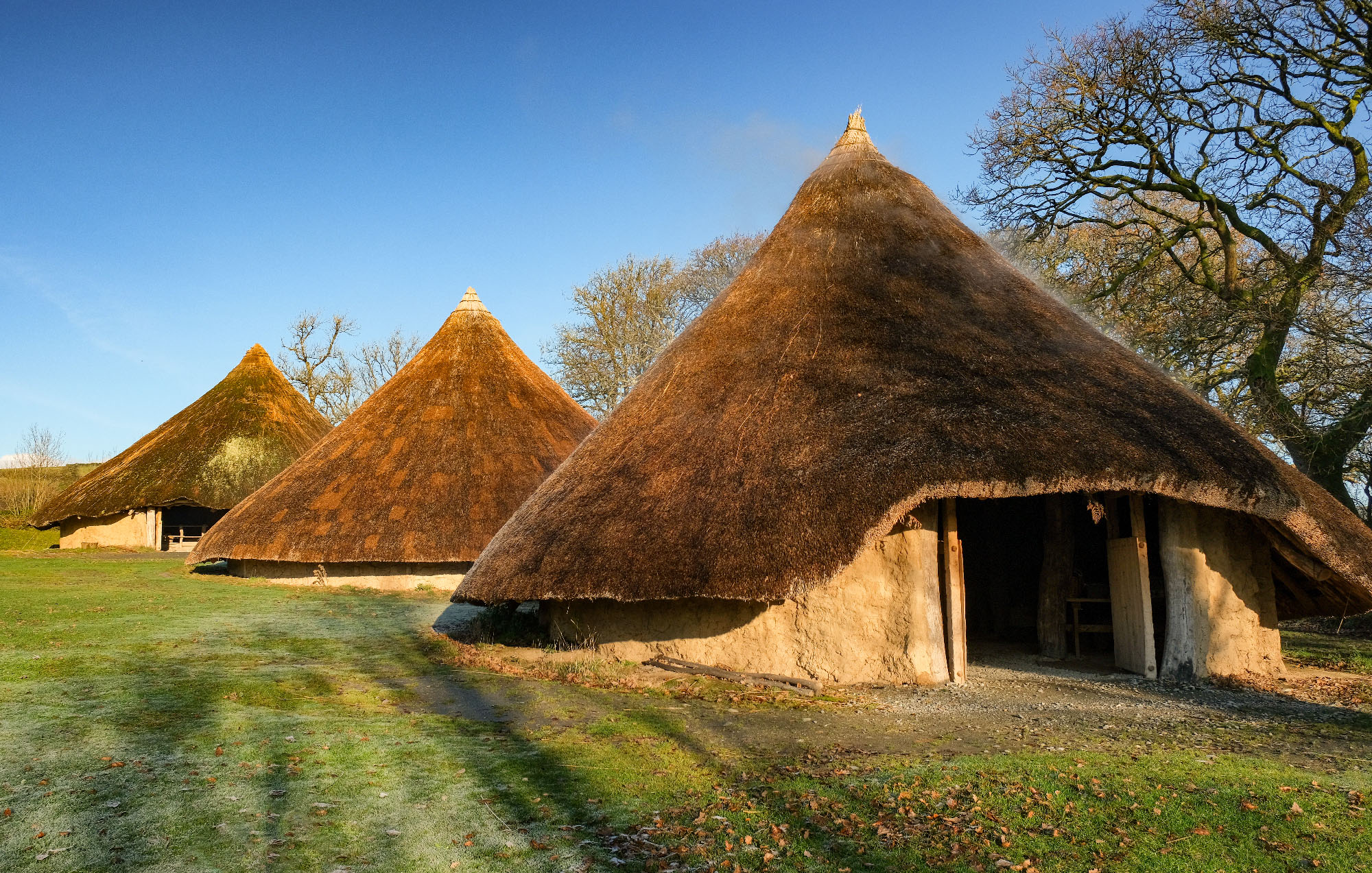 A mile from Brynberian is the entrance to Ty Canol Woods (insert link to Wolseley piece here) and a stroll straight down through this ancient woodland with its world-renowned lichens will bring you to the Cilgwyn valley. Its wooded nature and irregular small fields give Cilgwyn a distinctive character reminiscent of its medieval period and a contrast to the larger fields and moorland around its borders. There is a mystical element to the settlement, and myths and legends around and about it abound. Martha Morgan, the heroine of Brian John’s acclaimed series of novels, lived above here on Angel Mountain, aka Carn Ingli. Also on the slopes of Carn Ingli is Brithdir Mawr, a small low-impact eco community set on an 80 acre farmstead. Set up in 1993 by Julian and Emma Orbach, its aim has been to live an environmentally-sustainable and ethical lifestyle. (www.brithdirmawr.co.uk)

Perhaps the most renowned resident of Cilgwyn was the late John Seymour who with his wife, Sally Seymour, settled in Cilgwyn to live the self-sufficient lifestyle described in his influential book ‘Self-sufficiency’ (1973). Regarded as the definitive guide to self-sufficiency, this book was – and still is – on any self-respecting smallholder’s bookshelf.

There is a successful craft brewery, Bluestone Brewery (https://www.bluestonebrewing.co.uk/), on the Cilgwyn road which also hosts a varied programme of  live music events throughout the year. At the side of the ancient bridge on the bend is a candle factory open to visitors (Cilgwyn Candles http://www.pembrokeshirecandles.co.uk/).

Caersalem Baptist Chapel, built in 1841, is on the edge of the settlement https://www.coflein.gov.uk/en/site/11152/details/caersalem-welsh-baptist-chapel-cilgwyn, https://www.peoplescollection.wales/items/4248

Once an important administrative centre in medieval times, its population is now just 865 (2011) but for a small village, Nevern has more than its fair share of attributes and attractions. A ten-minute drive north west of Brynberian, across the A487 and down over the ancient picturesque bridge spanning the river for which it’s named and you’re right in the centre of this pretty hamlet. The river is famed for its sea trout, known locally as ‘sewin’.

The Norman church of St Brynach, built on the site of the important sixth century ecclesiastical centre of St Brynach, dominates the view and has much to offer the visitor. Through the lych gate the customary avenue of yew trees leads to the church doors. But there is one special yew on the right: the ‘Bleeding Yew’ leaks its ‘miraculous’ red sap constantly, giving rise to various myths and foretellings. Nearer the church entrance stands the 13-foot high tenth-century Celtic Cross (https://www.megalithic.co.uk/article.php?sid=6397).

Inside the church is an example of sixth century Ogham script cut into a windowsill of the Trewern Chapel. The church is a listed building, along with the bridge and no less than sixty other buildings in the community. In front of the Church gates is one of the few remaining examples of a mounting block, used by the gentry to get on and off their horses.

The Pilgrims’ Cross (https://www.coflein.gov.uk/en/site/304396/details/rock-cross-pilgrims-cross-nevern), cut into the stone on the roadside above the village, marks St Brynach’s as one of the stops on the way to St David’s Cathedral. Medieval popes decreed two pilgrimages to St David’s equalled one pilgrimage to Rome.

The early twelfth century Nevern Castle (http://www.castlewales.com/nevern.html) stood on a spur of the hill northwest of the church. Originally an Iron Age hill fort dating back the third century BC, little remains today although it has been extensively excavated  http://dro.dur.ac.uk/17055/ and is probably one of the earliest stone castles built in Wales. 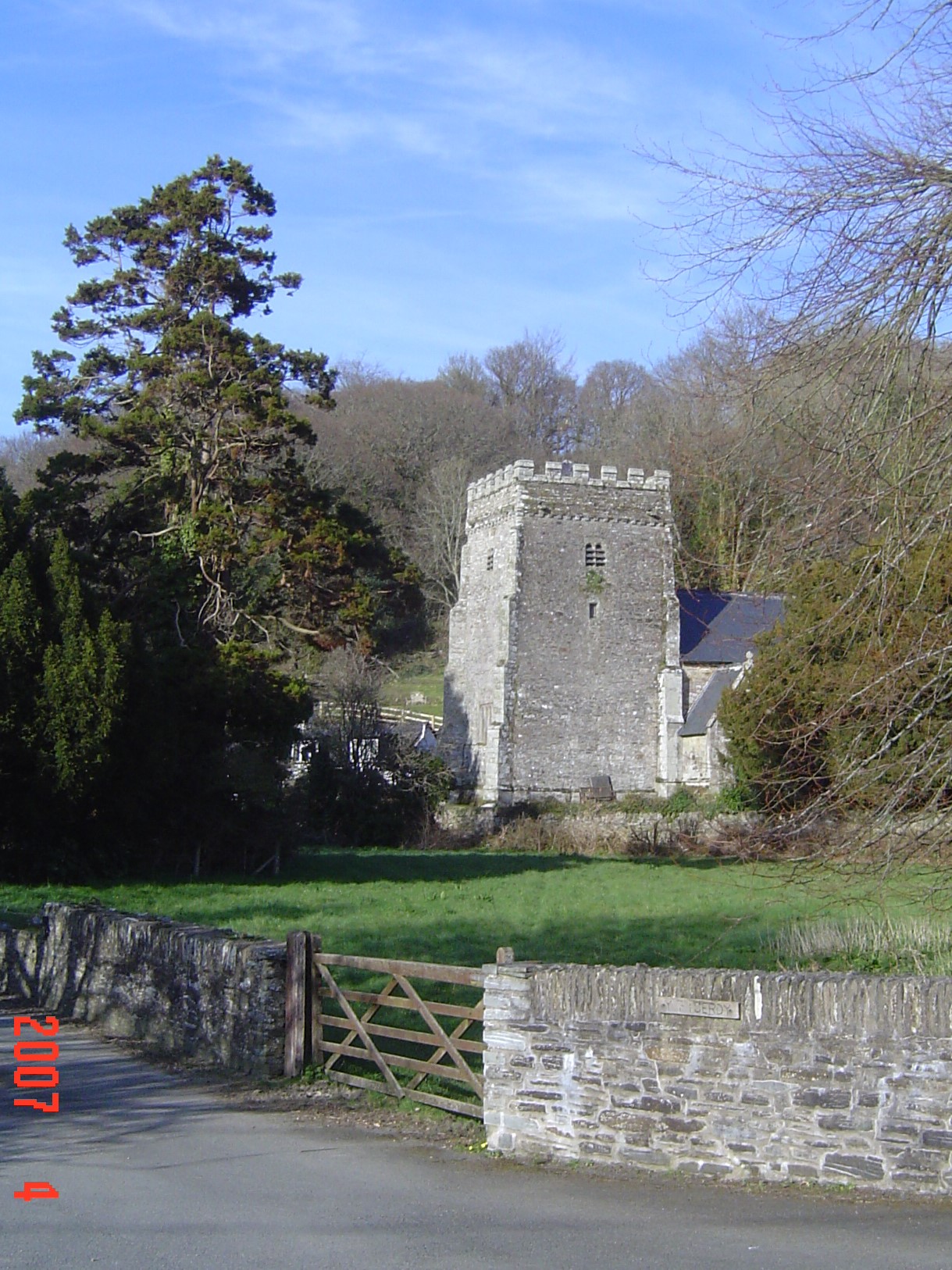 or locally known as “Tydraeth”

Lying roughly halfway between Fishguard and Cardigan on the A487 at the mouth of the river Nevern, Newport) (population 1161) has been an important hub for the surrounding villages for centuries(www.newportpembs.co.uk . Because of its location and proximity to a long golden beach and the picturesque Parrog on the Pembrokeshire Coastal Path, it can be a buzzing little place, particularly at holiday times.

But Newport has more to offer than its shops, galleries and many well-regarded hostelries and eateries. Founded at the end of the twelfth century, it was a busy port, built mainly on the burgeoning wool trade. It appears on a 1587 parish map of Pembrokeshire and is a former marcher borough, retaining still some of the borough customs like the annual Beating the Bounds on horseback and on foot.

A visit to Newport’s medieval pottery kiln, which was recently restored through Heritage Lottery funding, gives a splendid interpretation of the importance of the village from this time. It is thought to be the most intact example of its kind in Britain.

Newport Castle is situated on a spur of Carn Ingli and although fallen into ruin since the seventeenth century, it is still an impressive landmark above the town. A house, built into the old castle walls, is in private ownership.

A mile down the road to the coast, the Parrog (‘flat place for unloading ships’) is the old port area where you can find some of the ancient quay walls and two former lime kilns. There are pleasant walks in all directions – including across the estuary to Traeth Mawr (Big Beach) at very low tide. The Parrog, with its former fishermen’s cottages and sea captains’ houses looking out across the expanse of Cardigan Bay, must be one of the most photographed and painted views in Pembrokeshire.

Looking down on the town, St Mary’s Church was built in the thirteenth century and restored to its present state in 1879. A Heritage Lottery Grant has recently been obtained to restore the tower which, together with the font, are the only remaining original Norman features. 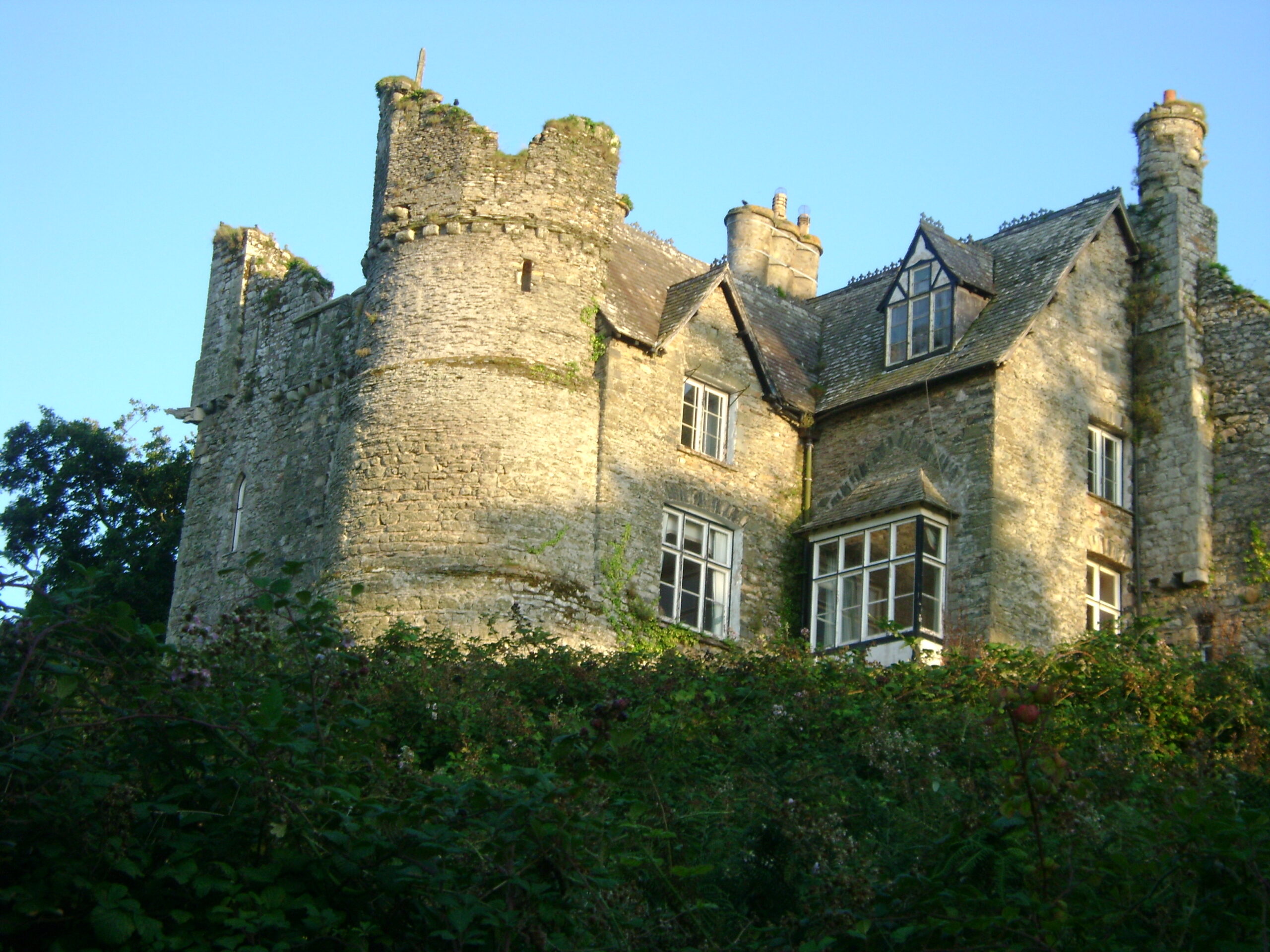