Myths and legends can give an insight into the values and perspectives of long-gone cultures. But myths are pure fantasy, you may say, and legends contain only the slightest grain of truth. Enjoy, ponder or disbelieve as you wish, you are now entering a land of strange events, stranger beasts and mythical creatures.

One of the stories below (Cerrig Meibion Owen) attempts to explain salient features of the landscape creatively, and another (The Great Boar) is from a thirteenth-century collection of Welsh tales entitled The Mabinogion. The many standing stones and Neolithic burial chambers in the area give rise to other tales recounted here (Pentre Ifan Fairies, The Afanc). However, not all legends are wholly ancient, as the strange tale of the Pembrokeshire Panther, first in evidence in the 1980s, demonstrates. One feature shared by all is that wherever you wander, virtually or in person, you will find many versions of the same story. It is for you alone to select the version which appeals the most, for even if the stories are pure fiction, the setting certainly endures for you to explore, experience and enjoy at your leisure.

Since the 1980s there have been many reports of sightings of large black cats in Wales, generally thought to be panthera pardus or black leopard.  Up to 2008 there had been 86 sightings in all, many in Pembrokeshire, leading to reports naming it the ‘Beast of Boncath’.

A resident of Brynberian tells how he disturbed one in his hayshed and then watched it leap a stream….or so he says. One bottle of beer too many? And what of the small children playing on the mountain in the 1990s, who came home with tales of ‘big cats’.  Was this just childish imagination? Or did they really spot the Pembrokeshire Panther? Could the Preselis, with their abundant rocky outcrops and forestry plantations, be just the place for a fugitive panther?

Celtic folklore reveres the black cat as a beast with great power, capable of shape-shifting and sometimes vengeful. So, if you take a walk on the Preselis today and see a black feline shape disappear behind a rock, do not expect to be believed – but you may just notice a knowing smile from someone at a local bar as you tell the tale. 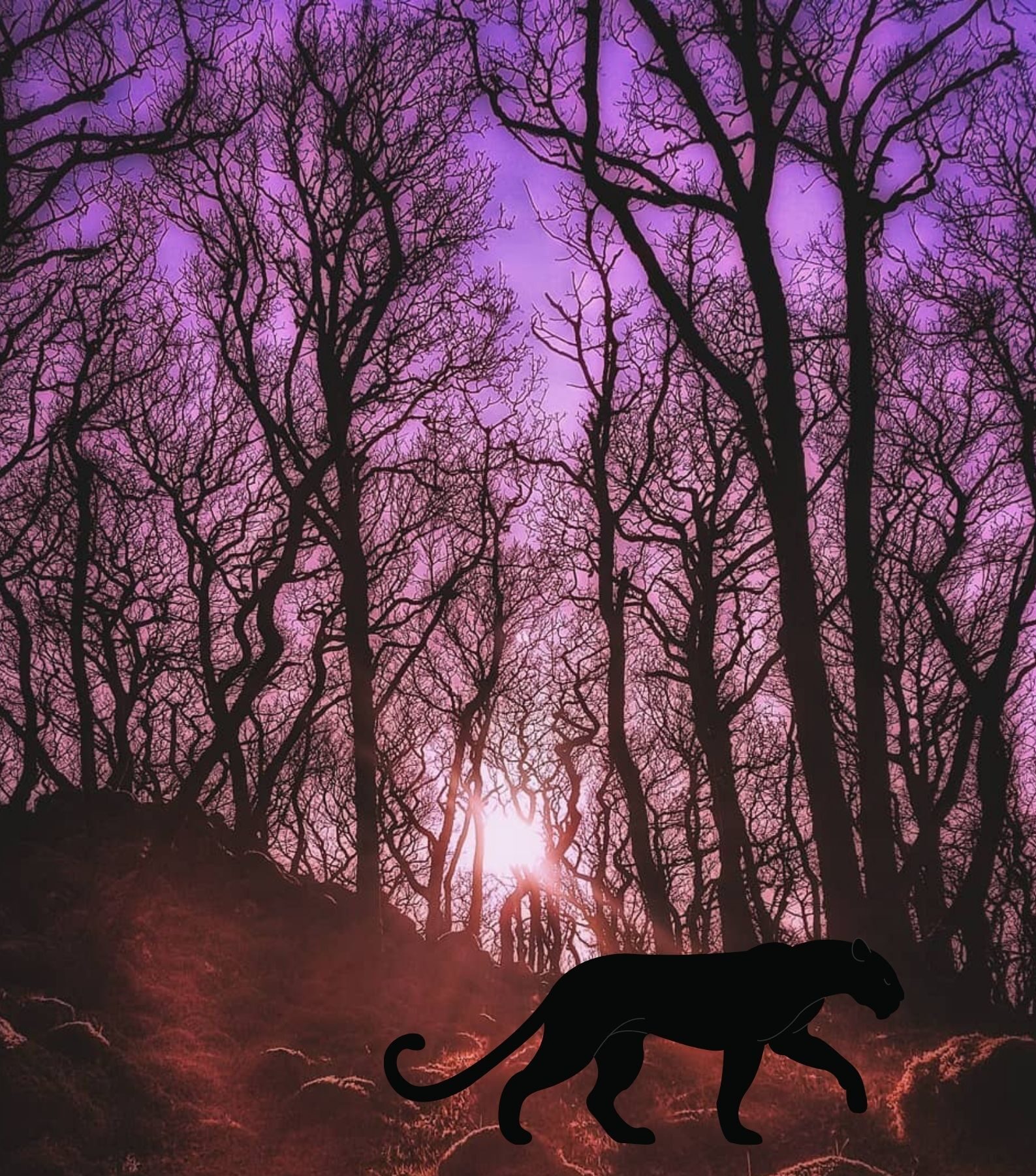 Just a short walk from Llwynihirion, above Tŷ Canol woods, you will find some spectacular mounds of rocks, named after the sons of Owen the giant. Many years ago, he ruled the area around Brynberian. Owen unwisely forgot to make a will before his death, leaving his three sons to divide the land amongst themselves. Being giants, reputedly not very bright and given to anger, the sons began to fight, hurling many huge loose boulders far and wide across the Preselis until they were exhausted and bleeding from their many wounds. Of course, the Preselis are strewn far and wide with the huge boulders they flung about. The fight was to the death and, ultimately, even the sole survivor died of his wounds. Where the bodies of Owen’s sons fell they turned to stone, similar to the ones that had caused their self -inflicted demise, and so today these impressive cairns are a reminder to those who know the tale to remember to bequeath their worldly goods wisely before departing this earth. 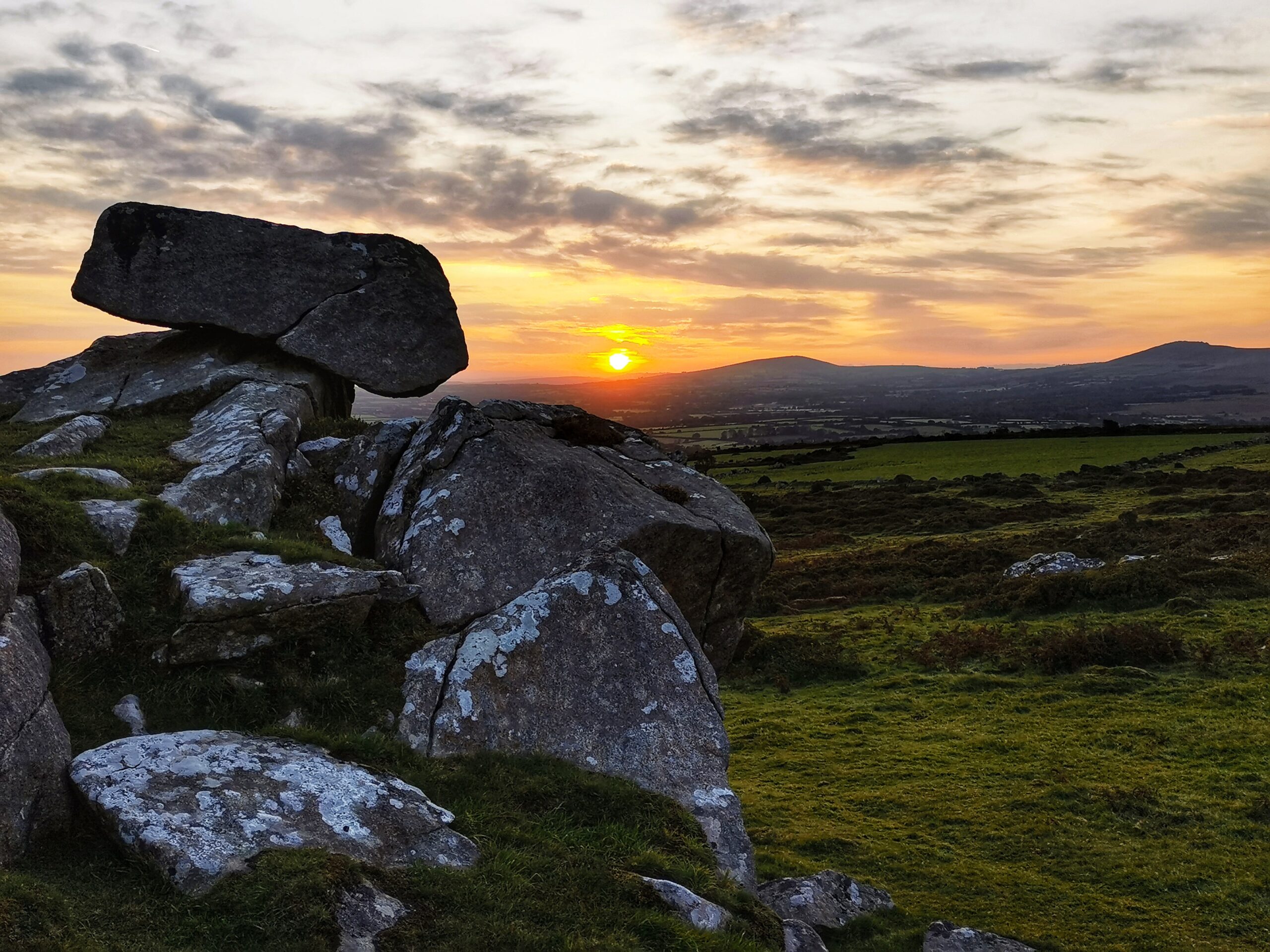 Some say that ancient people built the cromlech at Pentre Ifan to honour a renowned chieftain. However, the Irish claim their people were the only ones with sufficient building skills, a controversial idea to anyone local, of course. But what manner of people could have so artfully balanced the capstone on the standing stones so long before the days of the jac codi bawb (JCB)? Some say Merlin the wizard himself balanced the stone, but more believe that the fairy folk who live in the woods below used magic, that they alone knew to raise it and that they dance there still in their red boots and caps on moonlit nights.

You’ll find many a place to dance in Pembrokeshire on a summer’s night, but should you decide to dance at Pentre Ifan on the night of a full moon, hoping to see the fairies, beware, for it is said you will dance on forever if once you begin! 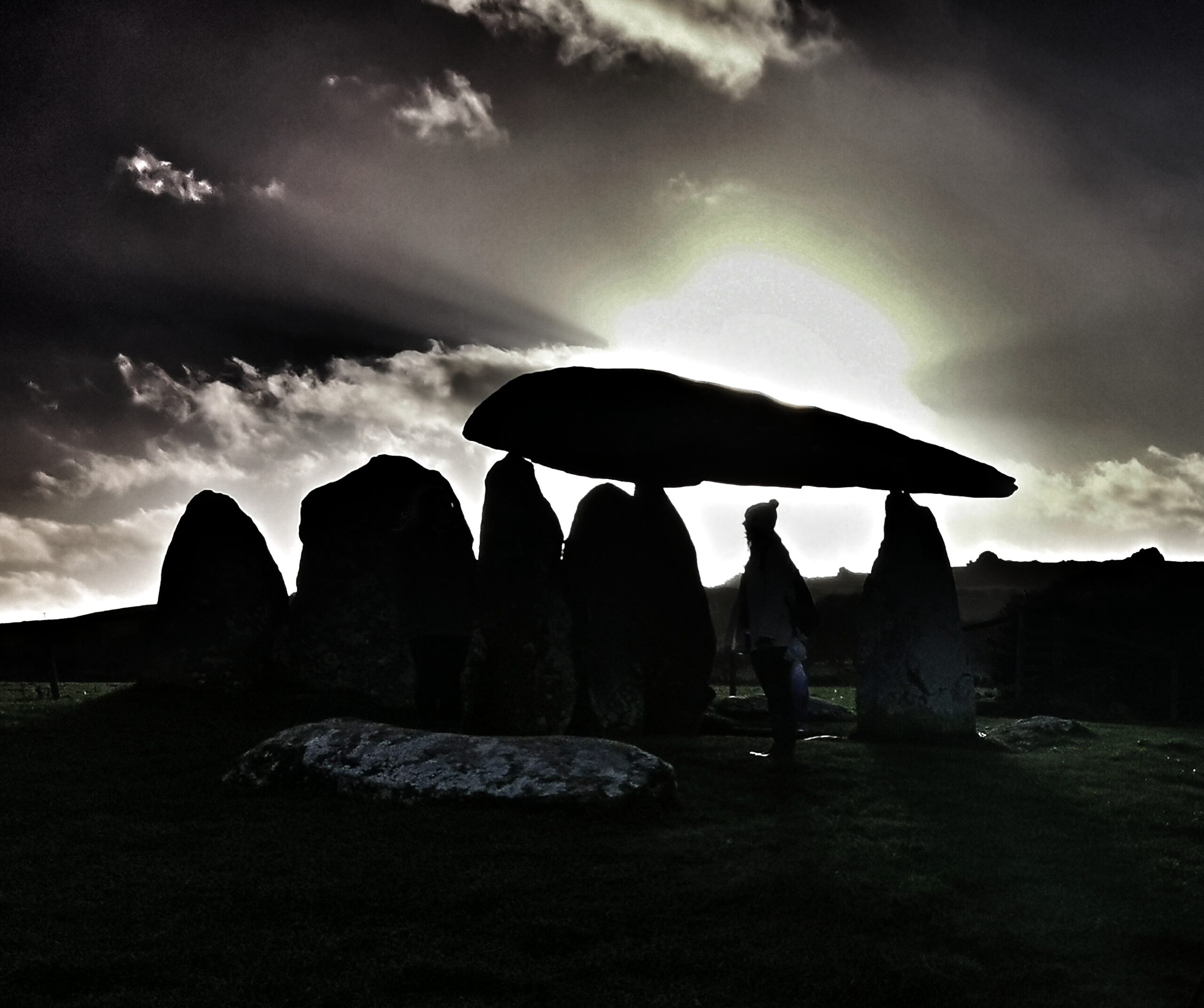 Culhwch, King Arthur’s cousin, fell in love with Olwen and asked her father for her hand in marriage. Olwen’s father, a fierce giant named Ysbabadden, set fourteen tasks for Culhwch. For the final and most difficult task Culhwch enlisted the help of King Arthur and his knights. The task was to retrieve a razor, a comb and a pair of scissors from between the ears of the Twrch Trwyth, a great boar said to have once been an Irish king.

Having found the boar in Ireland and chased him to the sea, a great hunt took place on the Preseli hills. Four of Arthur’s bravest knights were tragically and heroically killed just below the ridge of Foel Cwm Cerwyn, at a place now known as the Stones of Arthur’s Knights – Cerrig Marchogion. The hunt continued across south Wales, into England and then to Cornwall where the Twrch Trwyth was finally killed and the objects retrieved, enabling Culhwch finally to marry Olwen and live happily ever after. 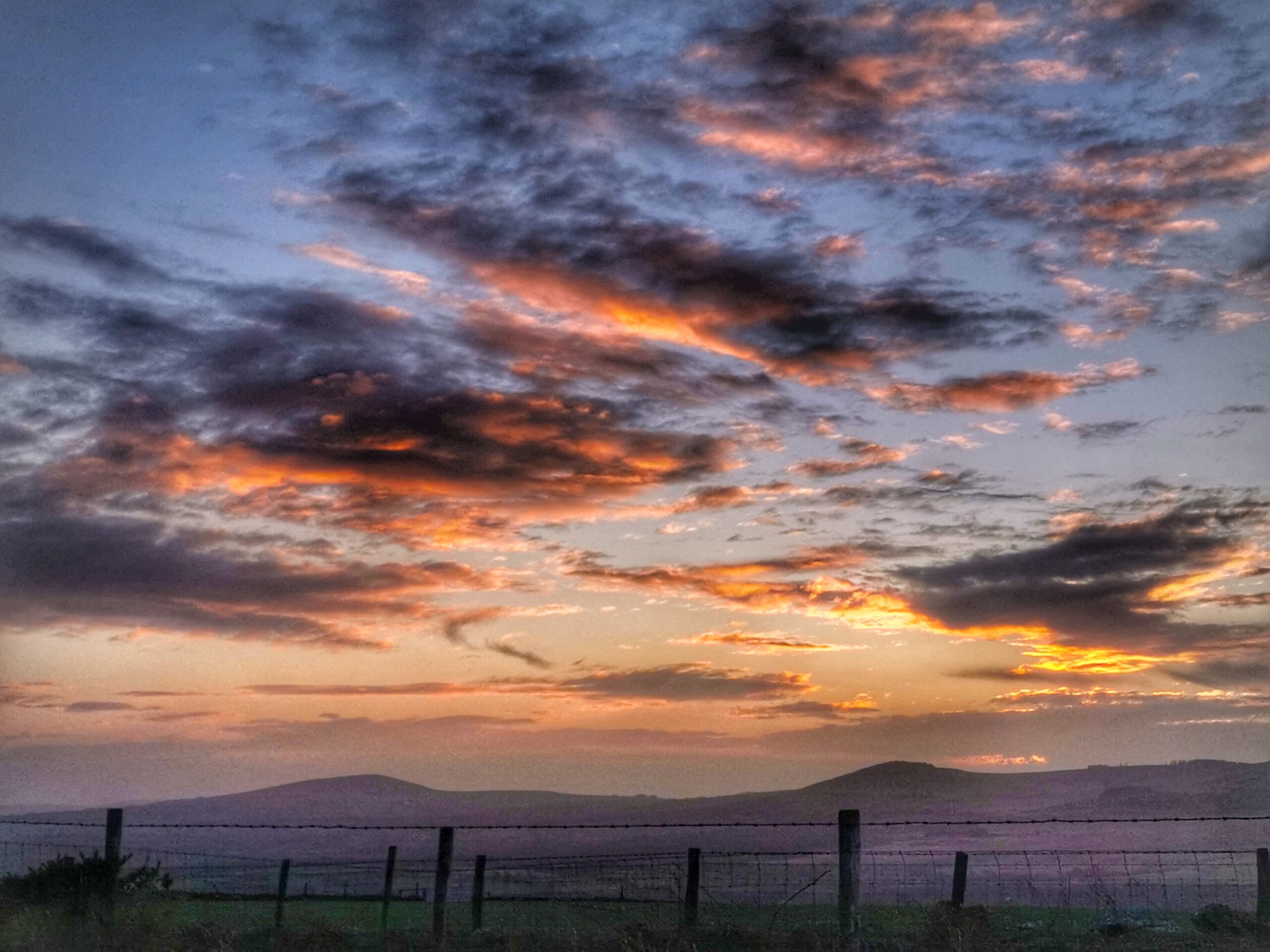 Many years ago the residents of Brynberian were terrorised by a water monster who lived in the great bog below the mountain.  He ruined crops, killed livestock and gave the people no peace. Some say he was half beaver and half crocodile, others that he resembled a large frog.  All agree that he had magical powers, and all agreed that he had to be got rid of.

Together the villagers met and decided to play a trick on the Afanc. They met with him and promised to give him food every day if he was willing to dig a well for the village. They showed him the place where they wanted a well and he began to dig. However, as he dug deeper and deeper, they hurled rocks onto him until eventually they decided he must be dead. They returned home relieved, but the next day they found the rocks moved aside and no vanquished monster.

Some say he became peaceful and died of natural causes, others that he ran away. Whatever really happened, today you can visit his grave close to the bog which was his home. 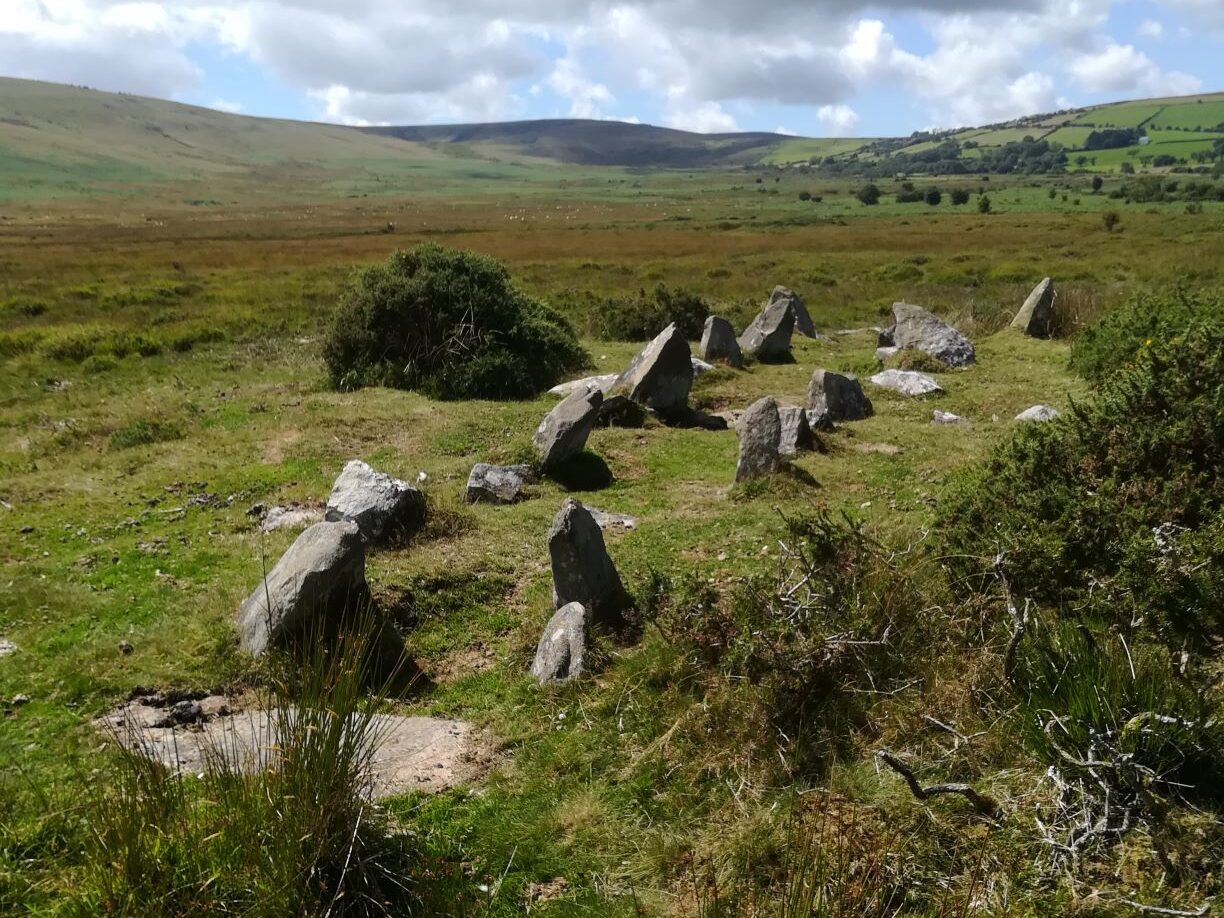 A keen gardener, smallholder, poet and teacher, I moved to Wales in 1977. My passion is language and I am fascinated by stories of all kinds.