The geology of Brynberian and its surrounding area

The geology of the Brynberian and surrounding area is dominated by sedimentary and igneous rocks dating back to Ordovician times, around some 460 million years ago. The sedimentary rocks are mainly soft mudstones which formed by the settling out of fine sediment in the Ordovician seas. They contain fossils (called graptolites) which tell us how old the rocks are. Coarser grained, harder sandstones form spectacular cliffs on Dinas Island. 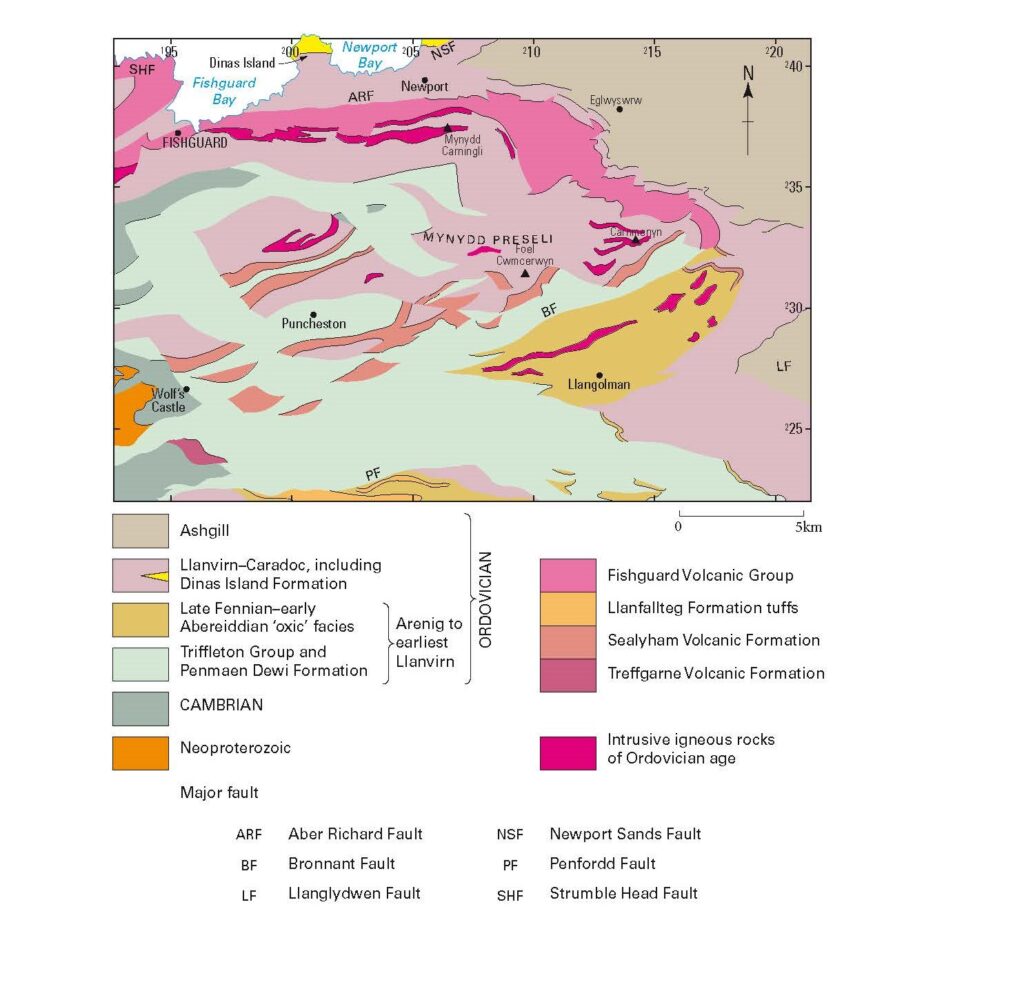 The igneous rocks were formed as a result of volcanic activity, leading to the eruption of magma as lava. Two types of lava are present – fluid basalt and ‘stickier’ rhyolite. The volcanic activity also led to the violent eruption of volcanic ashes which now form a rock called ‘tuff’. All of this volcanism occurred under water. Basalts exposed at Strumble Head are formed of magnificent ‘pillow lavas’, their pillow-like form being as a result of the underwater eruption. These represent one of the finest examples of this type of volcanic structure in the United Kingdom. Carn Alw on the Preselis is representative of the stickier rhyolite and was probably erupted onto what was then the seafloor, forming a steep-sided dome.

Some of the magma, however, did not reach the Earth’s surface, instead being injected into the Earth’s crust, leading to intrusions of dolerite and tonalite. Dolerite forms the majority of the crags on the Preseli skyline, including Carn Meini, Carn Breseb and, slightly downslope, Carn Goedog. The impressive mass of Carn Ingli is formed of tonalite. These rocks form the prominent crags and hills of the area because they are harder than the soft mudstones and hence more resistant to erosion.

Rocks from the Preseli area are famous for providing some of the stones used in the building of Stonehenge. Two sources for these stones have recently been identified, one at Craig Rhos-y-felin near Brynberian, the other at Carn Goedog, on the north-facing slope of the Preseli.

Professor Richard Bevins is the former Keeper of Natural Sciences at Amgueddfa Cymru-National Museum Wales and is currently an Honorary Research fellow of the Museum. In addition, he is an Honorary Professor in the Department of Geography and Earth Sciences at Aberystwyth University. He has been researching aspects of the geology of Pembrokeshire for over 40 years, specialising in its igneous and metamorphic history. For the last 10 years his focus has been on provenancing the Preseli sources of the Stonehenge bluestones. In recognition of these studies and his work with museums in Wales he was elected a Fellow of the Learned Society of Wales in 2017.