History of the Chapel and Notes on the Graveyard

The History of Brynberian Chapel by Awen Evans 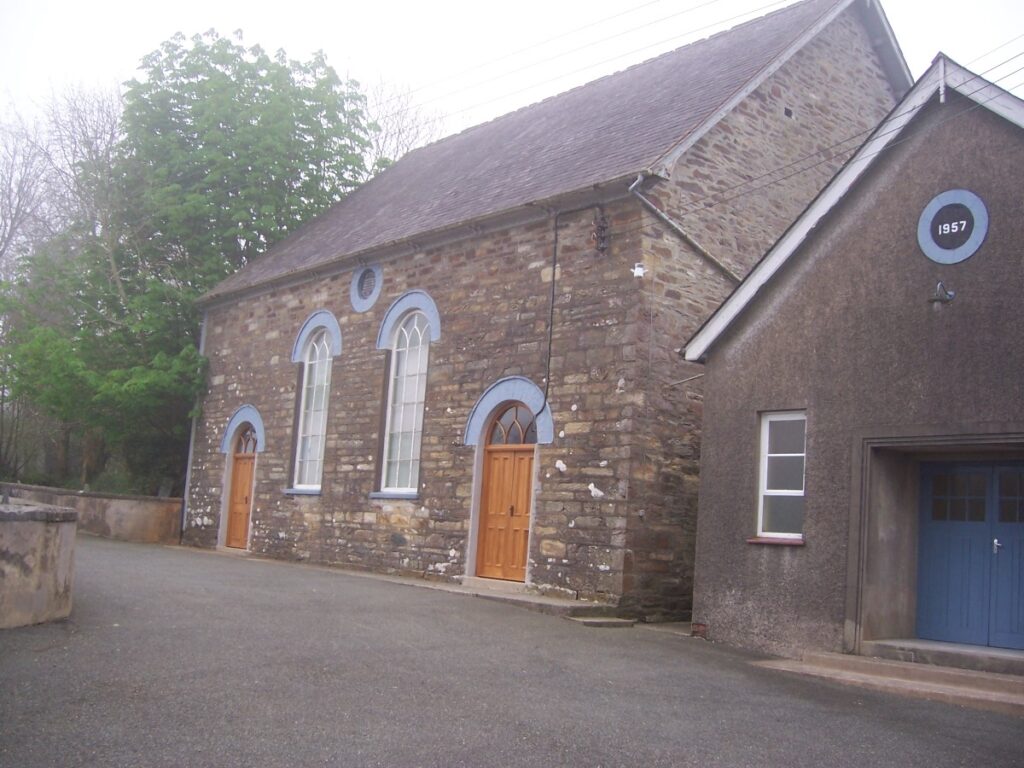 The origins of the cause can be traced back to a very early stage in the history of Nonconformity in Wales. It is likely that, during the time of religious persecution in the 17th century, early members of Brynberian held their religious meetings in various dwellings in the area, as well as travelling regularly to the mother church in the Llechryd area for communion. In 1690, the first chapel was built in Brynberian and incorporated here as an Independent church.

The chapel was built on the site of the present building and, according to the biography, Cofiant y diweddar Barchedig Evan Lewis, Brynberian (Aberystwyth 1903), the persons responsible for the work were: George Lloyd, Fachongle; Richard Evan, Pont-y-plwyf; William Owen, Frongoch; Thomas John Hugh from the parish of Nevern and Evan Morris, Cil-cam from the parish of Eglwys Wen.

The first chapel was a relatively small one, but one of significance as it is listed among the first chapels that were erected by Independents following the passing of the Tolerance Act (1689). Under this act, Nonconformists were granted conscientious freedom on condition that they stated their consent with Church of England theology, registered their places of worship, and secured licenses for their preachers. But, despite the few freedoms given to them by the act, Nonconformists were treated as second-class citizens.

Brynberian was probably initially a branch of the mother church that met at the house of Jenkin Jones in Rhosygilwen, Cilgerran. But because Independents in the parish of Nevern felt that Llechryd and Cilgerran were too far away to travel to commune, they decided, after the passing of the Tolerance Act (1689), to build their own chapel in Brynberian. The first ministers at Brynberian were from the mother church in Llechryd. Thomas Beynon and David Sais both cared for the church until David Sais’ death in 1741. Subsequently, the Church chose a minister from among its own members, David Lloyd. This custom lasted for a century because some of the most ardent Independents believed that a church should choose one of its members as minister. 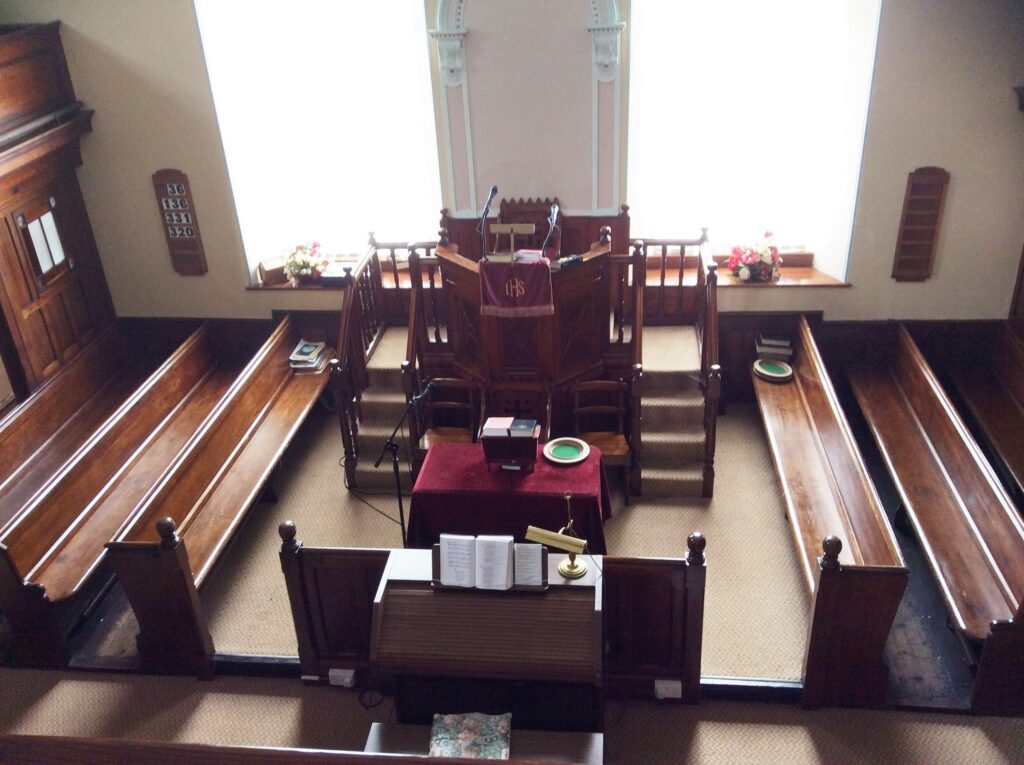 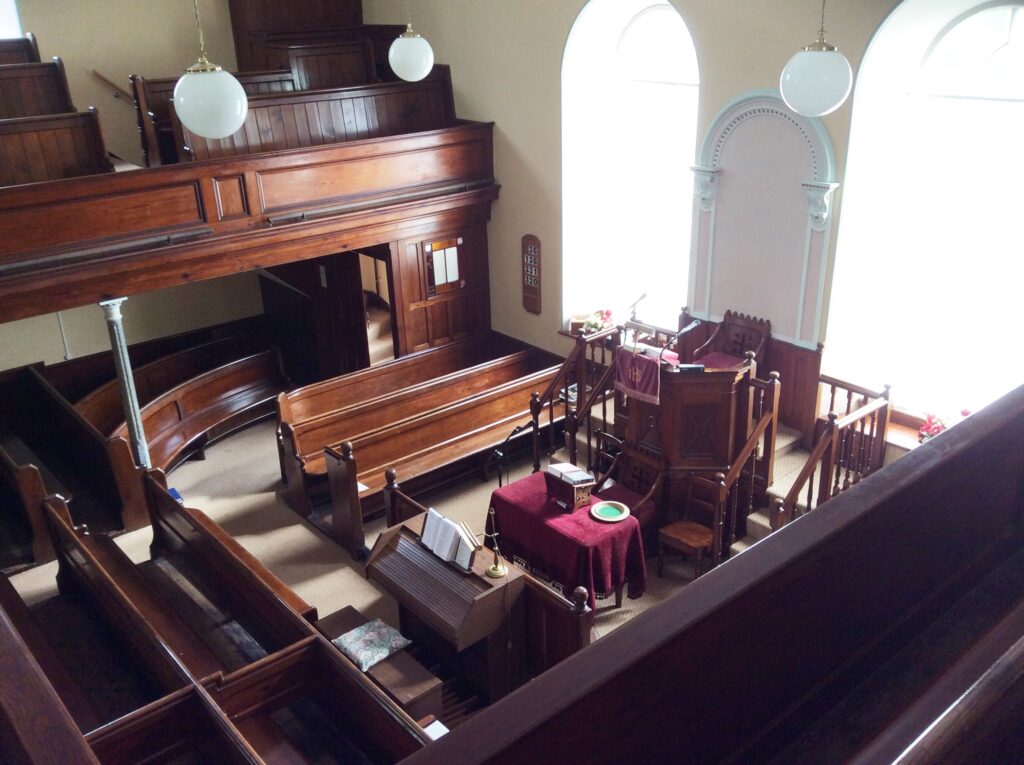 1764 – 1770.  Thomas Lloyd, brother of David Lloyd and minister of Moylegrove. He only took care of the Church.

1770 – 1799.  David Lloyd’s son, Stephen Lloyd. He was an active and successful minister. During this period, branches were formed in Felindre, Maenclochog and Bethesda, Llawhaden along with an English cause at Keyston near Haverfordwest.

1790 – 1840.  Henry George. He came to the area to assist Stephen Lloyd and, after Stephen Lloyd’s departure in 1799, all responsibilities fell on his shoulders except Keyston.

1818 – 1821. William Lewis. He came from the Carmarthen Academy to assist and took responsibility of the branch in Newport. Following his death in 1821, all responsibilities fell again on Henry George’s shoulders. In 1822, Newport chose a minister for themselves.

1843 – 1890.  Evan Lewis. He was a young student from Brecon College and was made minister for Brynberian and Chana, Felindre. From this year until 1974, the pattern of the ministry in the district became the same. Evan Lewis states in his biography that the Presbyterian influence of Thomas Beynon persisted in the churches as they had elders and deacons.

“The work of the elders, it was stated, was to take care of doctrine, while the deacons took care of the seasonal affairs of the church.”

Evan Lewis was a very committed and active preacher, giving much of his time to train the children and young people of the Church. He was very progressive in setting up the North Pembrokeshire Independent’s Sabbatical Schools Union. He left his job due to ill health.

1928 – 1937.  David Morgan from Gana, Carmarthen. David Morgan’s ministry was very inspiring, and members were disappointed when his health weakened. He gave his last sermon in November 1936 and although the church sustained him for a year, he failed to resume his work and died the following year.

1939 – 1952.  Llewelyn Lloyd Jones B.A. of Rhosymeirch, Anglesey (student). A great man of body and spirit. A highly respected minister remembered for his heavy, theological, and long-lasting sermons. He married Hilda Williams, Penrhiwlas, one of the young women of the church.

1952 – 1956.  Kenneth S Morgan of Tabernacl, Morriston (student). He was a diligent minister and very active with the young people of the Church. He married one of the Church’s young women, Olivia Griffiths Ravel. The new vestry was built during his time.

1985 – 1990.  Emyr Gwyn Evans from Maenclochog (student). A young, enthusiastic minister. A shame he was lost so soon. In October 1986, Ebeneser, Newport became part of the pastorate.

1990 – 2004.  Emyr Huw Jones.  He came to Brynberian from Keeston and Albany, Haverfordwest. He spent 14 years as a minister in the pastorate and contributed extensively to the religious and public life of Pembrokeshire through his service as a county councillor and to various public bodies. During his stay, he experienced several phases of ill health and had to retire early in 2004. He died the following year.

The churches were then without a minister for a period of four years. A new district was formed when the churches of Llandeilo and Tabernacl, Maenclochog joined the pastorate and formed the Bro Cerwyn Independents Association.

2008 – 2011.   Dr Cerwyn Davies who was a native of Tufton, returned to Wales and agreed to take care of the pastorate for a period of three years. He brought a spark to the meetings, as well as freshness and vitality to the activities of the churches. It was an incredibly happy time and he completed sixty years in the ministry.

2014 – present. Ken Thomas. The church was without a minister for three years after the departure of Dr Cerwyn Davies and during this time Ebeneser, Newport departed the pastorate and joined Bethlehem, Newport, a Baptist church. In May 2014, Ken Thomas from Tabernacl, Maenclochog was ordained. Ken was an active and tireless deacon for the cause, and he is highly respected.

Now, we have come full circle as we are once again beginning to choose ministers from among our members, as in the 18th century.

Theologically, Brynberian has always been a conservative church in terms of tradition. It has been a remarkably peaceful church in that it did not experience any of the controversial movements that many other Independent churches experienced during the 18th century.

Membership steadily increased throughout the first half of the 18th century, reaching over 300 members by the 1760s. It is believed that around 450 were present in meetings and 209 attending the school during this time. But by 1890, the membership had fallen to 272 and has continued to decline throughout the 20th and present century. As these words are being written (2020), the church has 75 members. This figure has not changed much for a decade.

We do not know where the early members were buried but believe that some of them might have been buried in the parish church. Nevertheless, the cemetery is old and, looking at old registers, we see that the oldest grave belongs to “Enoch David, died 7th of January 1817, aged 103. He is the first buried here”. There is also a grave for a Mary David, Penparke, who was buried in 1819, but we do not know if the two were related.

In the cemetery opposite the chapel are the graves of two former ministers of the cause, namely the Rev. Henry George (1840) and the Rev. Evan Lewis (1896). 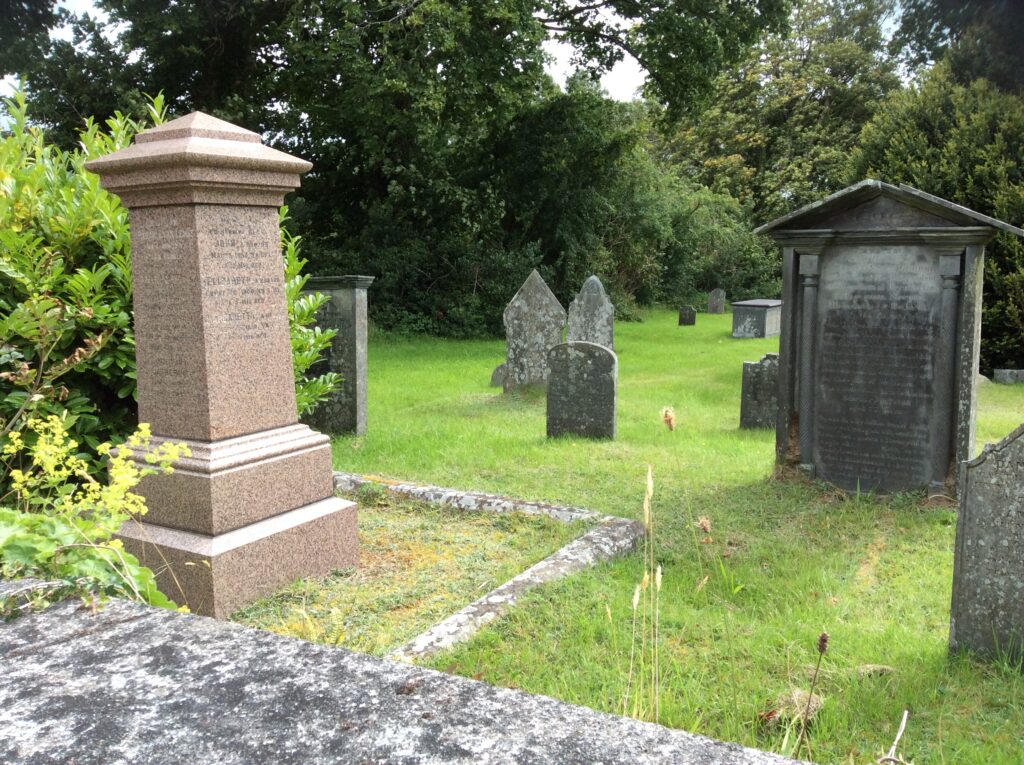 The vestry is a relatively new building compared to the chapel. According to the chapel records, a desire rose among the chapel’s young people to remove the old ‘little loft’ and build a new vestry. The work began during the ministry of the Rev. Kenneth Morgan and was completed in the early days of the Rev. Owen Evans. Mr Tom Rees, Ddôl-gam (who was then a deacon) took responsibility for constructing the building and he also had the privilege of officially opening the vestry at a meeting held on 12 May 1958. The vestry is a multipurpose building and is used by both the chapel and the local community. 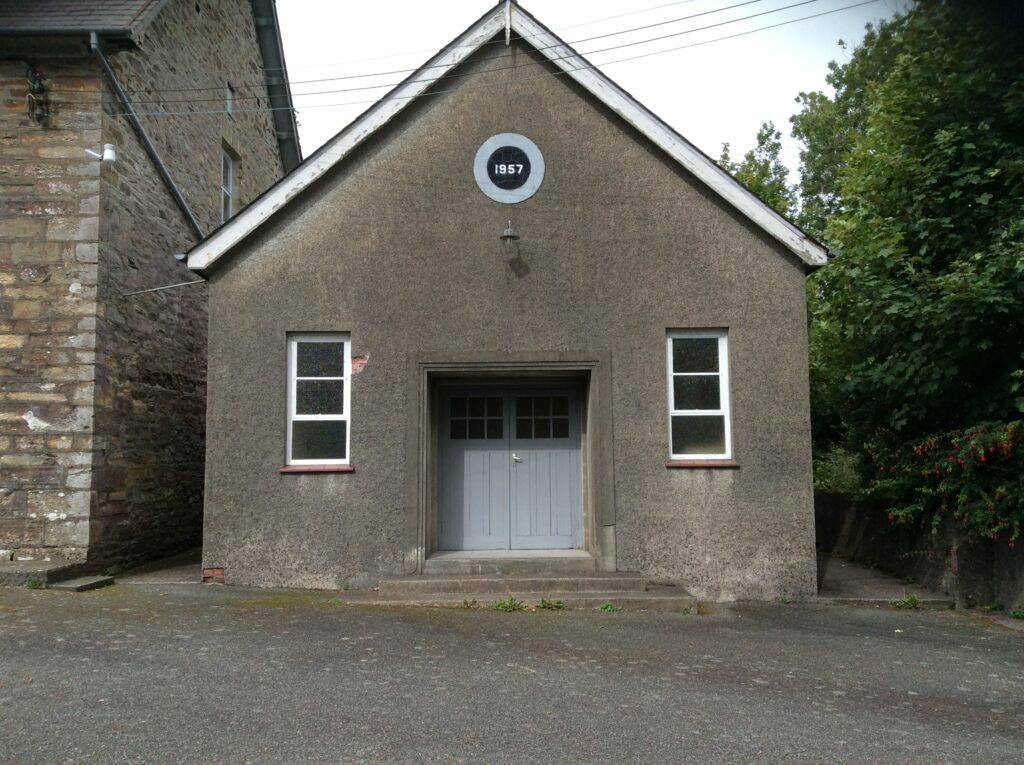 Brynberian Chapel has a historical significance, and the form and shape of the building has changed over the years. According to a plaque on a wall in front of the chapel, we see that the first building was erected in 1690 and rebuilt in 1808 and 1843. In 1882, the chapel was further repaired, and the old pulpit was moved to Pontcynon Chapel.

Minor improvements have been made to the church over the years, e.g. new doors and windows. Electricity came to the area in 1955 and was of great benefit.

Although the church has seen a decline in membership and audiences in recent years, a warm, merry, and hardworking church still stands here.

I was born at Pensarn Farm and was educated at Llwynihirion Primary, Eglwyswrw (one term only) and Ysgol y Preseli.  I then spent a year at Goldegrove Agricultural College.  I have farmed in the area all my life and currently live at Rhostwarch, our old family home where we run a Bed and Breakfast in the old converted farm buildings.  I have a keen interest in all local activities and am a past member of the ‘Aelwyd Ffynnongroes’ and Eglwyswrw YFC.  I am still very active with ‘Mocyn Du’ drama company, ‘Merched y Wawr Ffynnongroes’, Crosswell Hall, ‘ Canolfan Llwynihirion Brynberian’ and of course the chapel in Brynberian.  Our family’s connection with the chapel goes back generations as my great grandfather Henry Phillips Rhostwarch was a deacon there in 1844.