Llwynihirion Board school was built in 1878, as the plaque on the building attests. It took children from five to fourteen years of age. 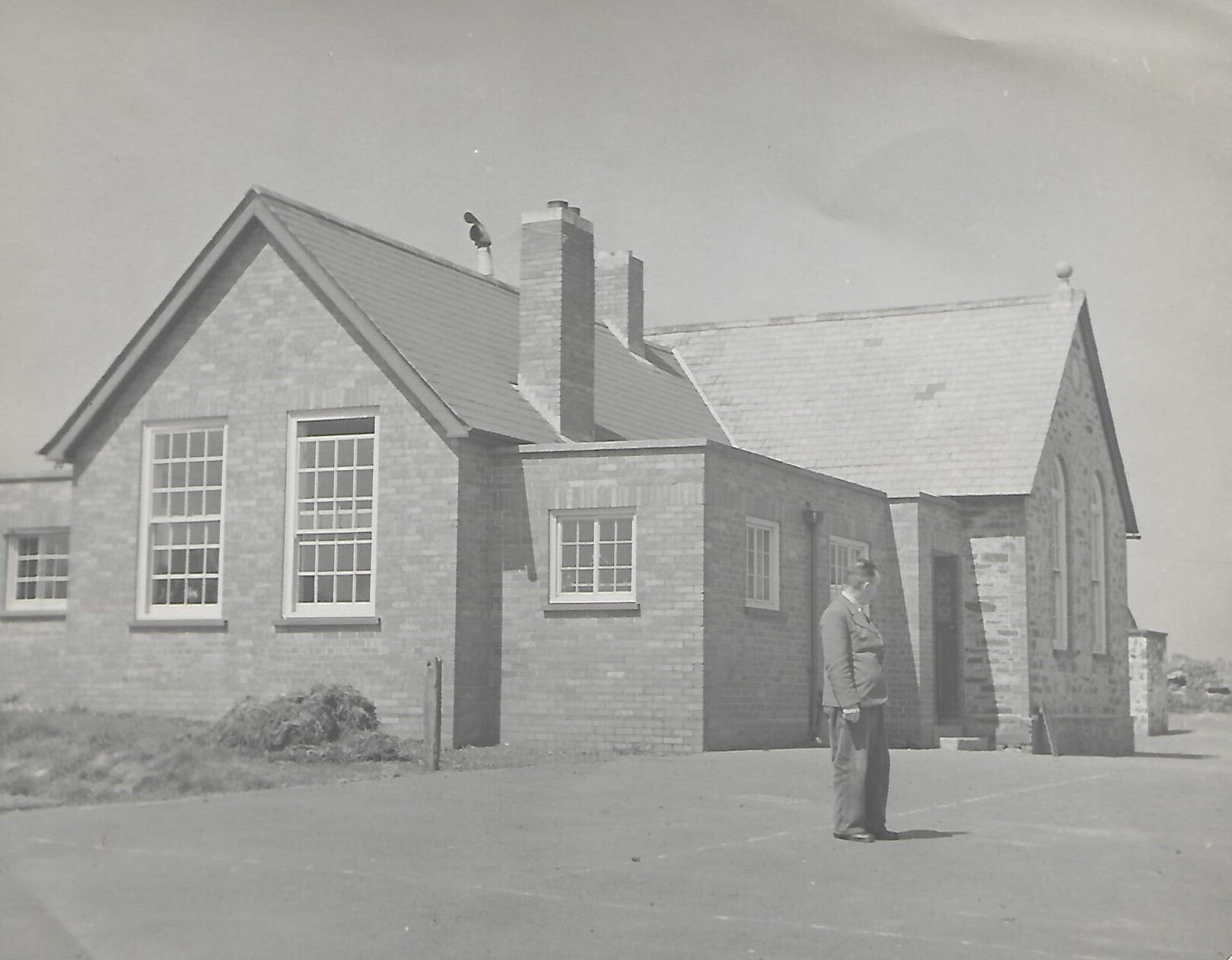 Travelling to school was very hard for the children of Llwynihirion in the late 19th and early twentieth centuries with most having at least a 3-mile walk in all weathers over the very difficult terrain of the Preseli hills. For this reason, attendance depended much on the weather conditions and was noted in the school’s logbook, as for example:

The attendance officer was a regular visitor and an entry on 18th May 1906 stated:

Very good progress made during the last week. Average attendance 52.9 – highest yet.

During the early years, in order to boost attendance, monetary prizes ranging from 3d to 5/- (6p – 25p) were awarded and found more effective than a reprimand. Living in a rural community, where almost every child lived on a small holding, their help was needed at harvest time and this was seen as far more important than education, so another reason for absence. A Furthermore, an event such as Eglwyswrw Fair or Ffair Gerrig in Newport were also noted as days of high absenteeism. 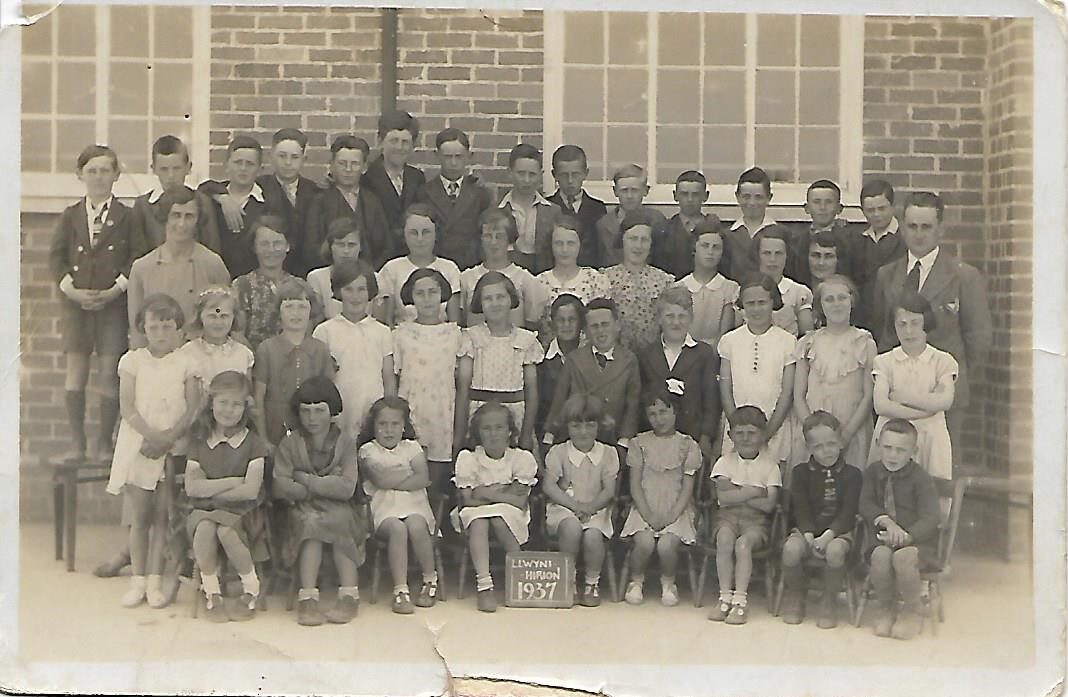 There were numerous head teachers from 1878, the first being G. T. Miles who stayed until 1910.
Four others held the post until 1926 when Ivor Davies became headmaster until 1963; he was an influential character in the community.

Ifor Davies was born in Frondeg, a small, isolated cottage not far from the village of Tegryn. He was one of eight children of James and Mary Davies.
He received his primary education at Tegryn School before going to Cardigan Grammar School. He then spent two years at Trinity College and qualified as a teacher in 1923. After working in schools in south Pembrokeshire he was appointed head teacher of Llwynihirion school, Brynberian in 1926 until his retirement in 1963.
He and his wife Mary settled in Crosswell and had two children, Seiriol and Sian.
He set up the Adran yr Urdd (for children between 8 and 14 years) in the school to immerse the children in the ideals and work of the Urdd and in order to extend that work he set up “Aelwyd” for the youth of the area who met for years in Crosswell hall. Members competed at the National Eisteddfod and entertained at “Noson Lawen” for many years.
A memorial to commemorate the work of ‘Mishtir’ as he was known to pupils and locals, was unveiled in Crosswell hall in September 2001. The memorial is in the shape of the Urdd badge and is carved on the blue stone of Preseli, with this couplet of Ieuan James’s work:

At the discretion of the headmaster, a few of the more able pupils were given the opportunity to sit the 11 Plus examination. If they were successful, they entered the County Grammar School in Cardigan, which involved a financial commitment for the parents. In the late 1930s all 11-year-old children were obliged to live in lodgings in Cardigan during the week. It was too far to travel the 12-mile journey on a daily basis, as very few farming households at that time owned a tractor let alone a car.

One particular smallholding had two daughters in the County School. With the income from the farm insufficient to pay for the lodgings, they had an agreement with the landlady to provide eggs, bacon, turkey or whatever food the farm could spare as payment. When the third daughter had the opportunity of sitting the entry examination, it was deemed that the family could not afford to send her to further her education and so she had to leave school at 14 to work on a local farm as a milk maid.

The closure of Brynberian school

On 2nd March 1970, the closures of Llwynihirion and Whitechurch County Primary Schools were approved by the Secretary of State with the establishment of a school at Eglwyswrw to serve the whole area. There was great opposition to this by parents of both schools, with several meetings taking place. Their main reasons for resistance was the distance the children would have to travel to the new school. It was even suggested at one meeting that a new school rather be established at Crosswell, as this would be more central than Eglwyswrw. However, after letters of appeal had been sent to no avail (including to Alice Bacon MP, Minister of State for Education and Science, and Desmond Donnelly MP), the doors were finally closed in July 1972 and the remaining 12 pupils were moved to Eglwyswrw.

The community buys the school building

In Brynberian the committee set up to oppose the school closure had lost this battle but was determined to buy the building as a centre for the community. After negotiating with Pembrokeshire District Council, a sum of £11,000 was agreed. During the coming years there were several fund-raising events which brought this community of like-minded people together. Jumble sales, Christmas and Spring Fairs were annual events for several years, with cake stalls in Newport’s Market Street being a weekly commitment over the summer months.
The Carnival & Sports was another great occasion for all ages and also helped raise funds. 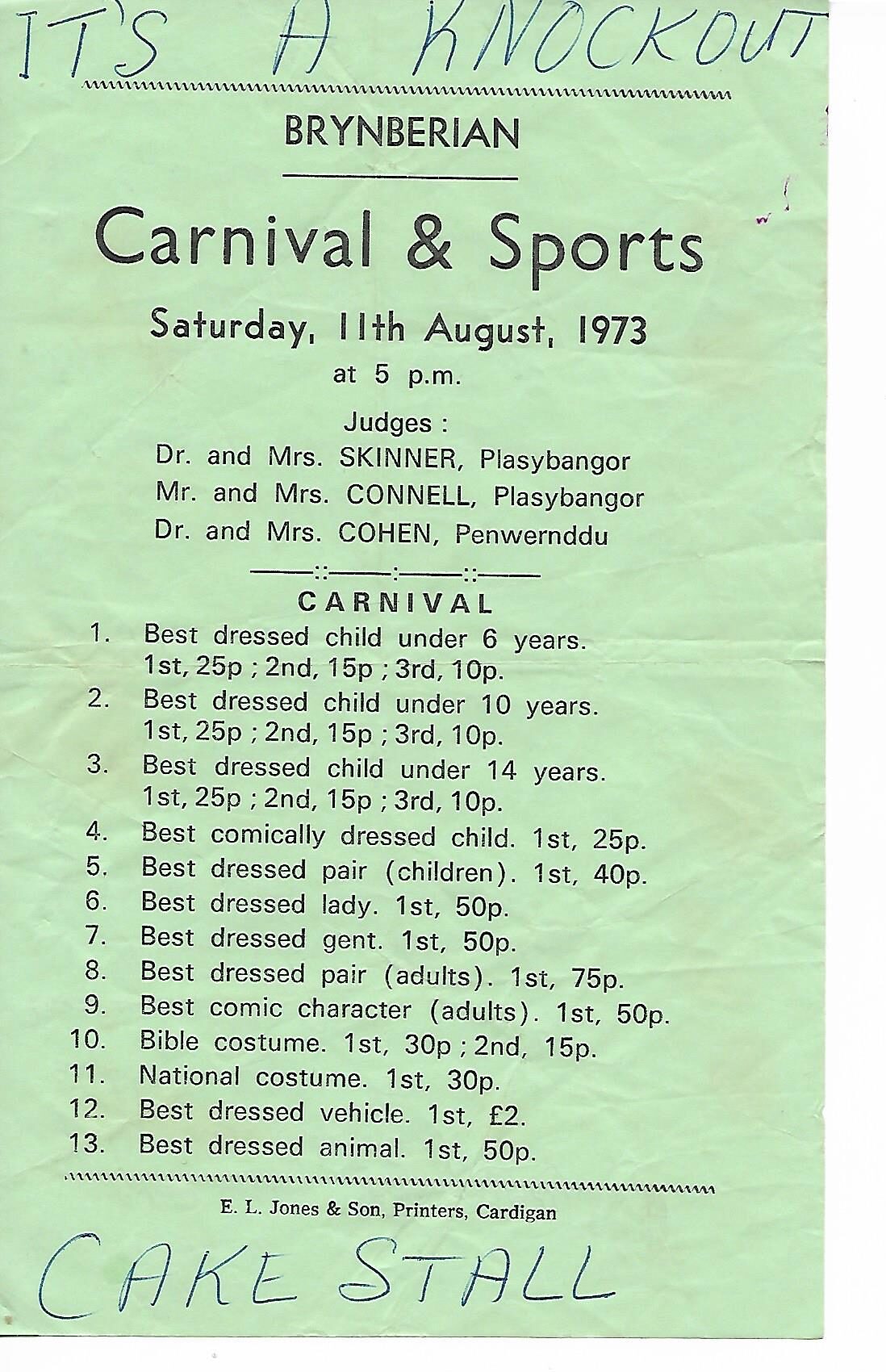 In October 1990 Brynberian won the national community award from the ‘Keep Wales Tidy’ Campaign. Three representatives, Val Jones (Tir Newydd), Irene Payne (Trehaidd) and Sandra Llewellyn (Ty Mawr) travelled to Cardiff for the award. The adjudicators praised the volunteers for their project of adopting a lane or road to keep free of litter. 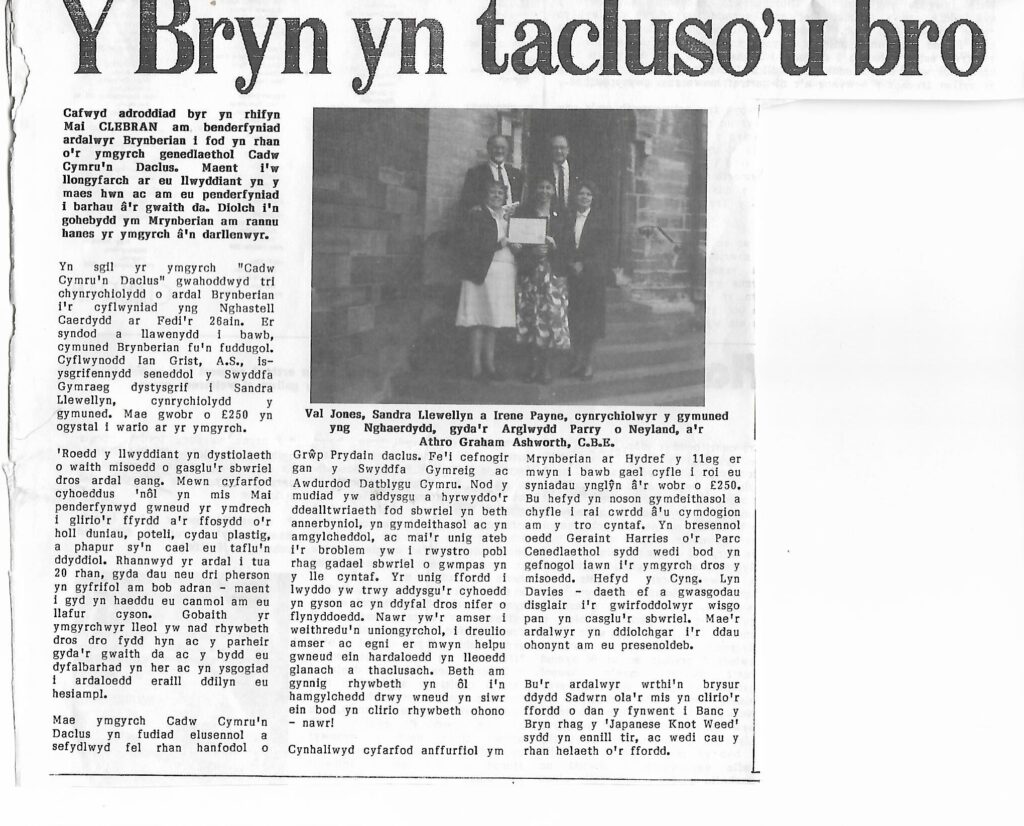 Changes to the building and its activities

Over the years, the outside toilet block continued to be in use. However, in 2000 new regulations meant that disabled facilities had to be provided. It was decided to convert the existing storeroom and update the old sewage system. A grant of £4,500 was received for this work, with the total cost being £8,725. To cover the shortfall the committee accessed the savings which had accumulated over the years from the “100 Club” (Clwb Cant).

In 1991 with the help of Brian Jones from Preseli Rural Enterprise, a further grant for £13,500 was received and the building underwent a much-needed facelift, with inside walls being plastered and painted. It was at this time that the ceiling was lowered in the small classroom, and a pitch roof replaced the flat roofs of the kitchen and front hall area.

Events continued over the following two decades with the Horticultural Show in late August being a firm favourite in the area. The Eisteddfod grew from strength to strength and the Whist Drives were very popular over the winter months. The summer holidays meant the Car Treasure Hunt and the Sports and It’s a Knockout event. 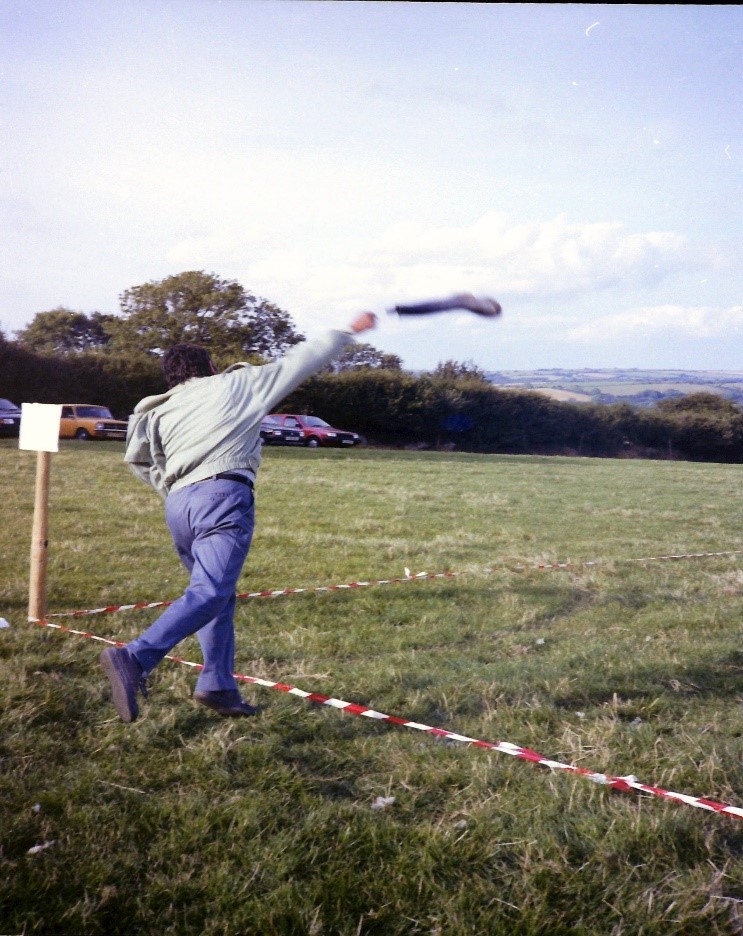 Sadly the latter finished because of the rising cost of insurance for the occasion, along with the regulations brought in by Health and Safety.

The area has always been rich in musicians, but especially so during the late 2000s with Mansel Kedward forming “The Bryn Billies” and regularly holding an evening of “open mic” for various instrumentalists to show their talent. It was also during this time that Mansel formed a class for Welsh learners who were taught through the medium of music. Rhian Owen from Menter Iaith complemented these sessions with weekly conversational Welsh classes.

I was born and brought up on the Cilgwyn Road just outside Newport, and live in Brynberian since 1982,  a Trustee since 1983.  My family have deep roots in this area with my father Aneurin Lewis attending Ysgol Llwynihirion.  In 1972,  my grandfather Cecil Lewis, Cilgwyn Farm was one of the founder members of the committee who objected to the closure of the school along with my mother in law Ruby Llewellyn, Bodlondeb.  I feel a strong attachment and responsibility to the continuing success of the now newly refurbished building, with gratitude and respect for those who fought so hard to buy the building for the benefit of the Community.