Sheep rearing in the Brynberian/Preseli area

Brynberian’s connection to agriculture is deeply ingrained in the fabric of the community. Farming includes the long-standing traditions of hill farming of sheep, as well as the iconic mountain ponies of the Preseli. It also encompasses dairy and beef on the lower lands and includes the self-sufficiency movement brought to the area in the 1960s by pioneer John Seymour. The Brynberian area has seen a diverse scope of land management and farming practices over the generations and today there are traditional farmers as well as those involved in National Park land management schemes to encourage biodiversity

This piece focuses on sheep farming, including the long tradition of transhumance and the story of how local shepherds took on and won a battle against the British War Office to protect their grazing rights. 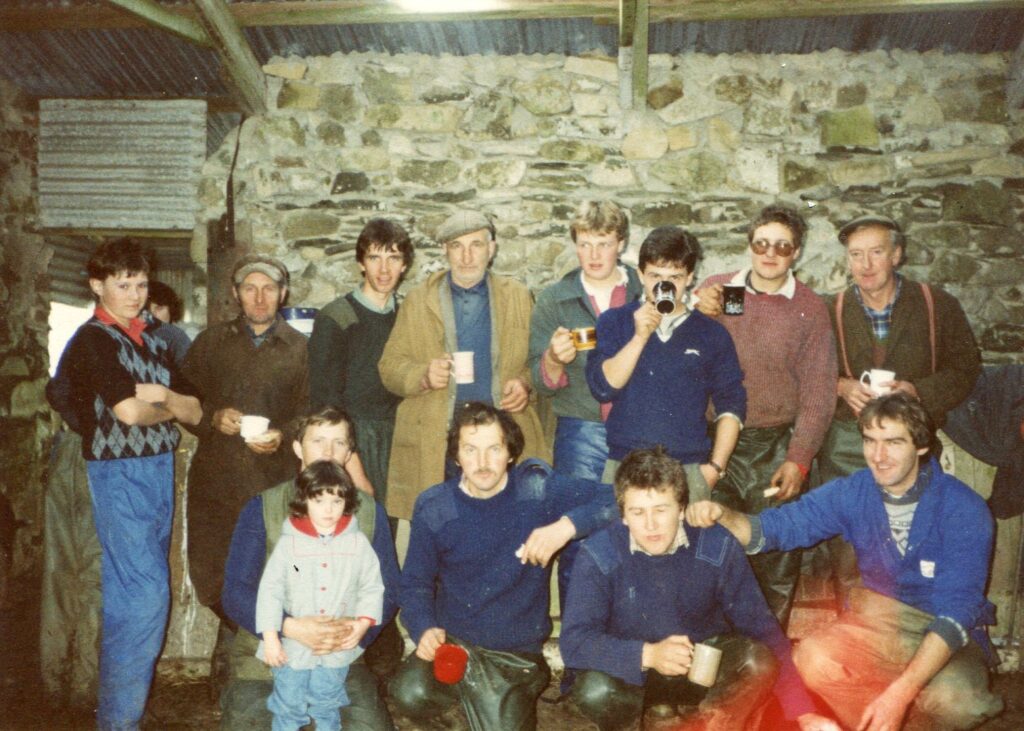 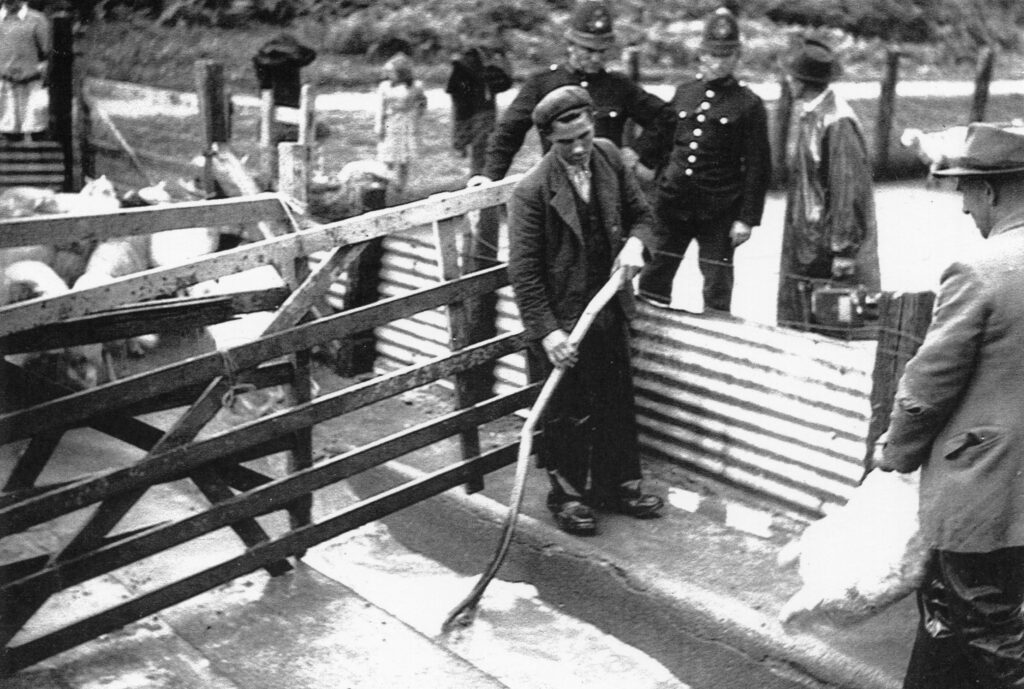 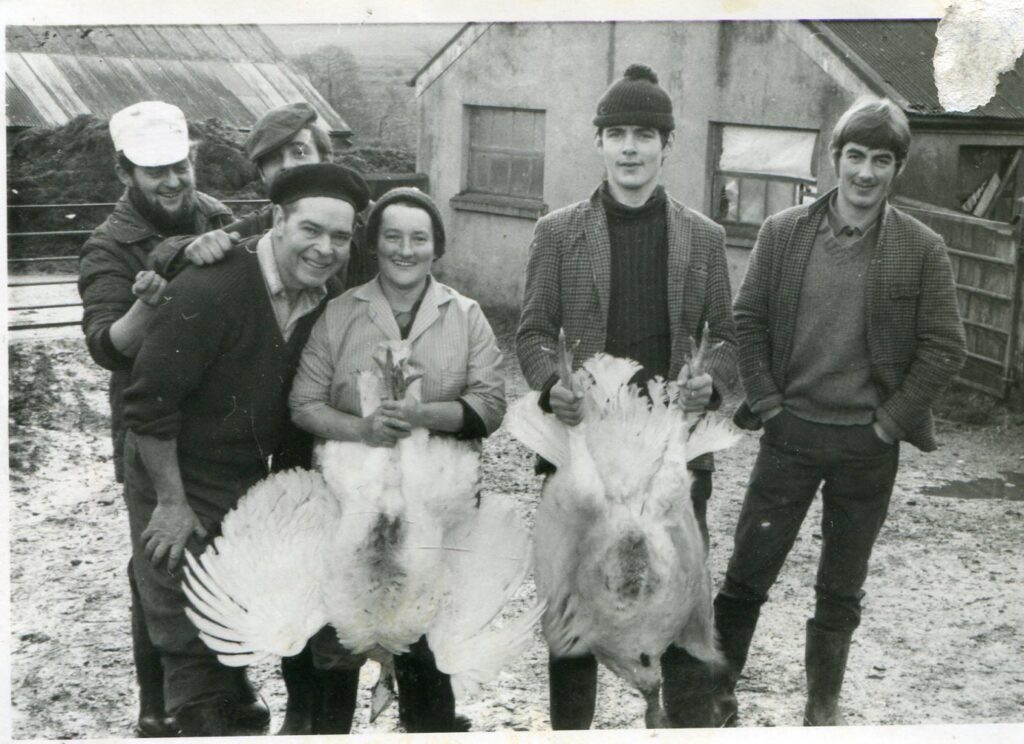 Transhumance is a rural tradition, stemming from the Middle Ages. The “Hendre” was usually the family home, sometimes made up of other dwellings of families situated on lower ground.  The “Hafod” or summer pasture was situated on higher ground and usually received bleaker weather the rest of the year round and could not maintain the status of a farm unless it could yield sufficient crops to over winter the livestock.

Traditionally May 1st was when the livestock would be moved to the summer pastures; this day was called “Calan Mai”. The livestock would then return to their winter quarters at the Hendre on November 1st or “Calan Gaeaf”. These dates were celebrated with great festivities, including driving the cattle through the blazing smoke of bonfires in order to ward off evil spirits and ensure fertility for the coming year!

Following the Second World War and the tragedy of losing flocks to the heavy snowfall of 1947, farmers from both sides of the Preseli hills changed the location of their transhumance to Castlemartin military firing range, a tradition which continues to this day. The hill flocks of the Preseli are transported to Castlemartin in south Pembrokeshire in November of each year. Here they are overwintered and have their lambs, before being transported back to the Preseli for the summer. The farmers of the Preseli take it in turns to shepherd the flocks at Castlemartin during their stay, and to move them around different parts of the range, depending on where the military are firing. Between the two West and East ranges there are approximately 9,000 Preseli sheep grazing down at Castlemartin each winter.

I myself have fantastic memories of joining my father and the rest of the extended family down at Castlemartin to shepherd the sheep.

As a child, the journey to Castlemartin always felt so very long (it is almost an hour). As we approached the reception of the Range headquarters to fetch a key to enter the range, my father always made a big fuss, telling us children to “hide down out of the way”. I wasn’t ever sure if this was serious or not – whether children weren’t allowed to be shepherding on the range or whether it was to make us behave ourselves! This was also the time just before the introduction of the “double cab pick-up”, so there were normally at least three of us hovering in the front of the Landrover or Daihatsu.

Once on the range and starting the job of gathering the sheep, my father would drop us off in a very remote part of the range and say “Walk that way, and bring the sheep with you!”. Sometimes he’d leave us a dog for company, otherwise it was a very long walk until finally – along with the gathered sheep – we descended onto the gather! A chaotic sight of thousands of sheep, many dogs and beeping vehicles driving the sheep through the expansive range towards the shedding pens.

When I became old enough, I was landed with the job of standing at the entrance to the shedding pen. This job could take hours, as my father quietly and painstakingly separated all his ewes (with their lambs) from the flock. Most of this work was done by my father picking out our sheep by their ear marks (which would be unique to us).

Once separated, the lambs’ ears were also marked and they were ready to come home to the Preselis. 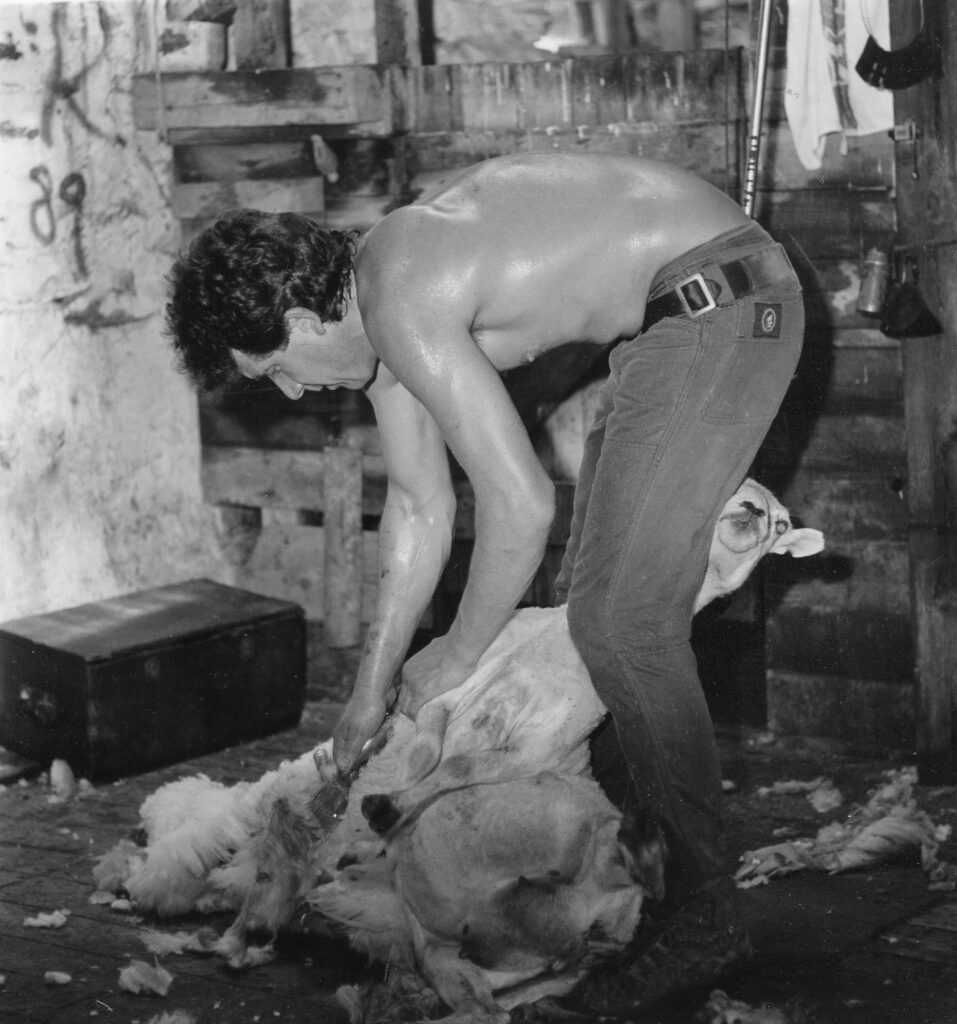 Saving the common grazing rights – the Battle of the Preselau

This part of our history within the Preseli region could have resulted in one of Wales’ most outstanding and treasured areas of natural beauty and heritage being forever cut off from its people.

Following the Second World War, during which the Preseli hills had been used for military training with the cooperation of the local farmers, in 1947 the War Office decided to evict more than 200 farmers from their grazing as well as some of their houses and transform the Preseli mountains into a permanent military training ground.

Within a few weeks of the announcement, the Precelly Preservation Committee was formed under the guidance of Nonconformist ministers, village schoolteachers and other public figures. Local ministers such as the Reverend Joseph James threatened to occupy a cottage in the affected area and refused to leave until he was jailed. So too was the Reverend R Parri Roberts, who told the generals that the area “nurtured souls” when they suggested it was merely grazing land.

Waldo Williams, one of Wales’ most notable Welsh language poets of the 20th century, penned a poem that appeared on the front page of national weekly Y Faner (The Flag), describing the War Office as “y bwystfil” (the beast).

By the spring of 1948 the Battle of the Preselau had been won due to the emphasis by local people on the religious and spiritual connections that the mountains possessed for them. A remarkable meeting held at Brynberian saw one minister after another rise to their feet to emphasise the ‘sanctity’ of the mountains. They noted that the religious and spiritual connections of the mountains had been apparent as far back as pre-history, as is shown by the fact that the Preseli is home to at least 38 ancient monuments.

They also noted that the bluestones were taken from the Preselis to Stonehenge on Salisbury Plain to form one of the cradles of English civilisation and argued that no cultured English people would defile an area where they had strong historical connections. It appears that this argument finally won the day, or at least it was an easy way out for the War Office and the Labour government rather than confess that the strength of the opposition gave them no choice but to yield. 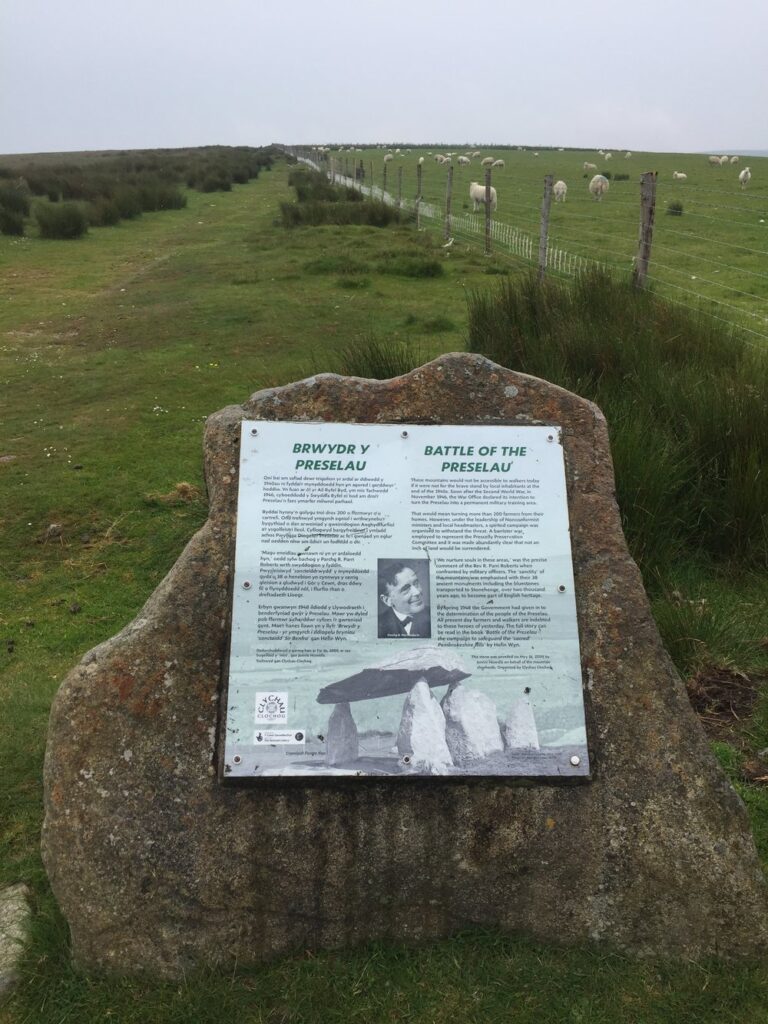 Hefin Wyn, 2008. Battle of the Preselau 1946-1948: The Campaign to Safeguard the Sacred Pembrokeshire Hills

Sophie Jenkins has deep roots in the Preseli region as she comes from a long pedigree of Brynberian farming stock. She works part time as Coordinator for Canolfan Llwynihirion Brynberian and also on a NLHF (National Lottery Heritage Fund) project for PLANED which celebrates the rich and unique heritage of the Preseli Heartlands. When not working, she can usually be found wandering the hills with her dogs.