This ancient woodland appears on maps dated as early as 1578 and is described by George Owen in 1603 as part of Cilrhydd – “a fair wood and the best timber in the shire”. Evidence from large oak coppice stools, some more than 3 metres in diameter, indicates that there may have been trees here in the iron age or even earlier. The woodland is unique in Wales for the way it grows over numerous rocky outcrops of gabbro and dolerite rock. These outcrops, together with extensive boulder fields, are found throughout the site.

The northern and lowest part of the reserve, known as Hagr y Coed, is wet woodland, with numerous small spring-fed streams. Oak is common throughout much of the canopy which also contains ash and downy birch. There is an understorey of scattered hazel, rowan and holly. Hagr y Coed also contains long abandoned fields. The drier fields have acidic grassland with invading bracken and gorse, but the wetter areas are developing secondary woodland of mainly sallow, birch and alder.

Between Hagr y Coed and the open heathland of Carnedd Meibion Owen in the south, lies the steeply sloping Tycanol Wood. This is a typical Welsh upland oak wood, where sessile oak is the dominant tree with scattered birch, mountain ash and hazel. The considerable exposure of the upper slopes in Tycanol Wood maintains the tree canopy at a relatively low level; indeed, at the very exposed southern edge, the canopy is no more than 2 metres in certain locations. All the woodland has a long history of agricultural grazing; grazed woodland of this type is known as ‘wood pasture’.

The wealth of rock exposures in the form of tors, low cliffs, crags and boulders, provides a wide variety of habitats for plants and animals. A walk through the woodland and the heathland will reveal that many of the surfaces of the rock faces, tree trunks and branches are covered in lichens. Nearly 400 different species have been identified, including many rarities, making Tycanol one of the most important sites for lichens in Britain.  Ty Canol – A Pasture Woodland.

Growing in the shaded and damper hollows of the tors and cliffs are a number of nationally rare fern species. These include Wilsons and Tunbridge filmy ferns and hay-scented buckler fern. These locations also support a wide range of mosses.

Other features of interest include a population of dormice, polecats, a wide variety of insects and some of the typical birds of West Wales, including raven, buzzard, pied flycatcher and redstart.

There are numerous archaeological artefacts in the area including an Iron Age fort (rath) within Ty Canol and the adjacent Pentre Ifan dolmen. These and the nature of the ancient woodland contribute to an atmosphere of great antiquity and long association with people.

Ty Canol National Nature Reserve (NNR) is protected by designation as Coed Ty  Canol Site of Special Scientific Interest and also has an international designation as part of the North Pembrokeshire Woodlands Special Area of Conservation.

The woodland should continue to support oak woodland extending over the historically wooded areas of Tycanol Wood and Hagr y Coed, covering an area of approximately 41 hectares. Only locally native broadleaved species will be present with sessile oak being common in Hagr y Coed and dominating the canopy in Tycanol Wood. Vigorous non-native species such as sycamore and beech will be absent from the canopy.

At any time, there are gaps within the canopy of between 5% and 15% of the entire wooded area. Growing in the gaps are the seedlings and saplings that are the next generations of trees to fill the canopy.

Permanent glades are very important. They provide well-lit conditions on glade boundary trees that are very good habitats for lichens. A series of permanent glades exists throughout Hagr y Coed and Tycanol, the largest of which are the ‘Gravel Field’ and Pencawsi Meadows in Hagr y Coed. These, and some of the other larger glades, have ‘parkland’-like open grown trees, mainly oak, but also some ash.

It is generally ‘open’ under the tree canopy and, where ground conditions allow, visitors can walk freely through the woods unimpeded by dense shrubs, scrub or other undergrowth. Cattle, ponies or sheep have broken off many of the branches of trees up to a height of two metres. The woodland floor and lower trunks of trees are generally well-lit and there is little deep shade beneath the canopy. All stages of tree growth are present, with veteran trees, maiden trees and saplings being represented. Dead and dying trees are frequent throughout the wood, providing habitats for invertebrate, fungal and other species that depend on dead wood.

Hazel occurs throughout the wood as vigorous young coppice through to mature old growth. In Tycanol, stools are frequent but often solitary.

In Hagr y Coed, particularly in the northern areas abutting Pentre Evan, stands of hazel are quite extensive. This area supports part of the thriving population of dormice which inhabit the wider Cilrhydd woodlands (Cilrhydd is the entire woodland block made up of Tycanol, Hagr y Coed, Pentre Evan, Pencawsi and Tir Coed Isaf).

The larger rock outcrops occurring throughout the woodland and heathland are mainly free of heavy shading and shrubs and scrub in their vicinity are sparse. Likewise, the rocks and boulders strewn over Carnedd Meibion Owen are largely exposed by virtue of the surrounding short-sward heath vegetation. 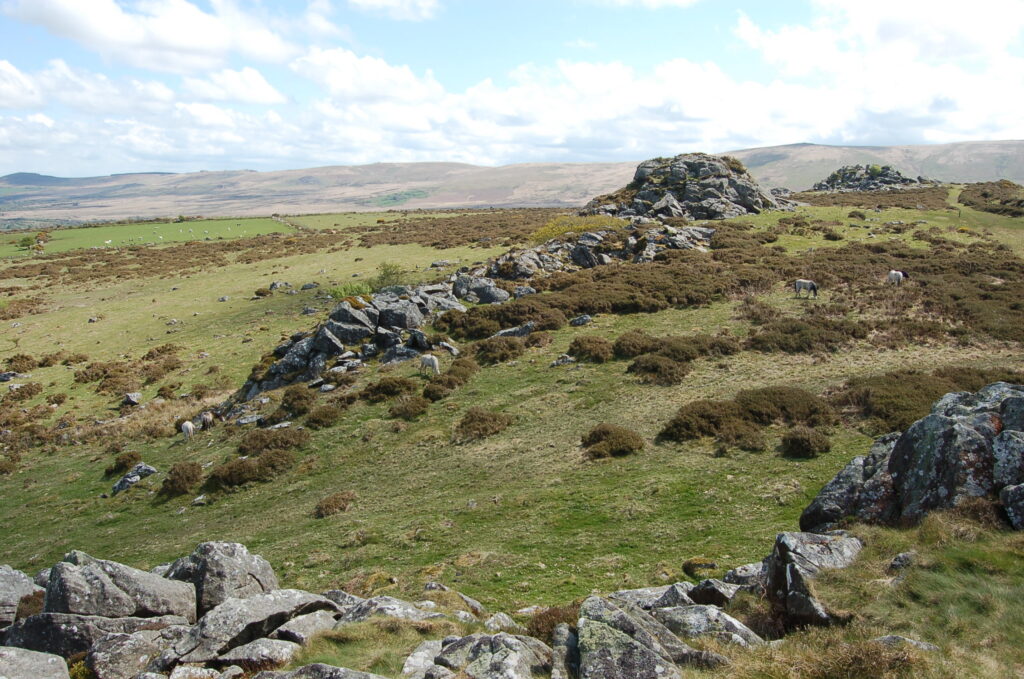 Most surfaces of rock and wood are enveloped in rich growths of lichens and mosses. The range of species is extensive and includes lichens which are specifically associated with ancient woodlands. Some of these are nationally rare and listed as Red Data Book lichens. These include Pamelia endochlora, Parmelia taylorensis, Parmelia jamesii, Phaeographis lyellii, Sticta fuliginosa, Sticta limbata and Sticta sylvatica. Cladonia luteoalba, a Red Data Book species of open moorland, also grows on Carnedd Meibion Owen.

Healthy populations of the rare Wilsons and Tunbridge filmy ferns grow on the shadier, damper surfaces of rocks on the larger outcrops in Tycanol and swathes of hay-scented buckler fern grow amongst the hollows between tors and cliffs.

What management is needed in Ty Canol and why?

The continuation of the historical practice of grazing cattle and sheep is fundamental to maintaining both the character and range of plants and animals associated with this unusual site.

The open, well-lit conditions of wood pasture are particularly favoured by old forest lichen communities and those that have survived at Coed Tycanol need the continuity of conditions within the woodland that only grazing can maintain.

Much of the woodland has a uniform structure with large areas of trees of the same age and size. To encourage the development of a more diversely structured wood with trees of all ages well-represented, active management will be necessary.

What does this mean in practice?

Stocking the woodland with 70 – 150 sheep and 5 – 20 cattle or ponies must be carried out annually. Sheep grazing will normally take place during the months of April – December and cattle grazing between May and September. Numbers of stock and grazing period will need to be varied depending on such factors as weather conditions and growth of vegetation. It is important to achieve the right balance between maintaining open conditions and over-grazing the wood to the point where woodland ground flora is sparse. The development of bramble must be carefully managed. Whilst sheep will prevent bramble development at reasonable stocking rates, at lower rates dense stands of bramble can develop which trap sheep by their fleece. In order to maintain the practice of grazing, it is recognised that the wood must be maintained in a ‘grazeable’ condition. Cattle are also an important element of the grazing regime. They browse at a higher level than sheep and tend to knock off low branches which opens up the base of trees to receive more light.

Grazing of the acid grassland and heathland on Carnedd Meibion Owen prevents the shading of the rock, boulders and outcrops. This is very important for lichens which are not tolerant of heavy shade. Hill ponies are the preferred grazing stock as unlike sheep, they will not preferentially graze heather. Some mowing will also be necessary to control western gorse. 15 – 20 ponies will be required annually to graze between the months of April and December.

Grazing stock will inevitably have an impact on the natural regeneration of the woodland.  At stocking levels that may control bramble development and keep the wood ‘grazeable’, seedling and sapling trees will be eaten and trampled. A system of rotational stock exclosures will be used to protect seedling and sapling trees which will become the canopy trees of the future. Before exclosure, selective tree felling will take place to create gaps in the canopy and allow light to the woodland floor. Fences will be erected after felling and new saplings which develop in the canopy gaps will be allowed to grow to a stage where they are ‘browse-proof’. This will normally take 15 – 20 years. After this point, the exclosure fencing will be taken down and erected elsewhere. At any one time, up to 10% of the woodland area may be exclosed in this way.

In order to maintain a healthy population of hazel, a system of coppicing will be used throughout the wood. New growth from hazel stools is vulnerable to stock grazing and so managed stools must be protected by temporary hurdling. This will need to remain in situ for up to 5 years after coppicing.

The existing series of permanent glades will be maintained. Although much of the necessary vegetation control will be achieved by grazing, it will also be necessary to mow grassland occasionally and control bracken by rolling.

Well-spaced young oak and ash trees, which are growing in the permanent glades, will be protected from grazing stock by fencing. This fencing may need to be retained in the long term to protect the vulnerable lower trunks, which are important for lichens, from being damaged by cattle and sheep rubbing.

As part of woodland management aimed at creating and maintaining a mixture of all ages of trees in the woodland, old or veteran trees may need special management to ensure they achieve a long life. This may include tree surgery and pollarding.

Control of European gorse, willow and sallow scrub around the base of the rock outcrops in the wood will be carried out to prevent shading of key lichen communities.

Paul has managed National Nature Reserves for the Countryside Council for Wales and Natural Resources Wales since 1996. He spent 1996/97 in Pembrokeshire then moved to manage nature reserves in Ceredigion 1997-2011. In 2011 he returned to Pembrokeshire and has remained there until the present. He is a Director of PONT, the grazing animals project in Wales, and also a Trustee of the Wildlife Trust of South and West Wales.