Ty Canol wood, an NNR (National Nature Reserve) and SSSI (Site of Social Scientific Interest), is one of those places where visitors feel that time has stood still, a place where ancient tracks pass between gnarled old oaks, past the remains of medieval settlements, and through prehistoric sites such as Pentre Ifan Dolmen and the Iron Age rath (earthwork) in the woods. The woods give way to the moorland around the four rocky outcrops known as Carnedd Meibion Owain – the cairns of the sons of Owain – and on to the Preseli hills where stone could have been quarried for the inner circle at Stonehenge or to build Pentre Ifan Dolmen.

Humans have travelled through these woods since they first arrived here after the Irish ice retreated around 10,000 years ago and have left their marks on the place, where they have coppiced or felled trees, built walls now covered with moss and lichen or made clearings for crops. Plants and animals have also left their traces and can tell us their own stories about changes in the climate and environment with time.

Even the rocks tell us of volcanic eruptions, lava flows and huge floods of meltwater when the ice retreated depositing tons of gravel – we now call it the Gravel Field – where the land and woods dip towards Pentre Ifan. Woodlands continue from Ty Canol to the Gwaun – along the steep slopes of a valley carved by ice – all now part of a north Pembrokeshire Special Area of Conservation.

The upper slopes are formed of outcrops of dolerite and tumbled boulders now obscured by woodland dominated by sessile oak trees (Quercus petraea).

The twisted stems of the oaks are the result of a combination of continual coppicing and the exposed situation where the woodland canopy is sculpted by the wind.

These give way to wetter woods of alder and willow below Hagr y Coed – the Witches’ Wood.

Scattered through this area are huge veteran trees of oak and ash, remnants of the once-mature woodland that formerly continued to Pentre Ivan forest where George Owen lived and commented in 1605 that ‘trees upwards of 200 years old’ grew in this wood. Everywhere there are signs of human use and occupation, clearings in the wood, remains of walls and old settlements now covered with moss and lichen and a track that you can still follow from the Preseli hills to Newport.

This wood has provided timber, shelter and firewood for generations of people, as well as grazing for their animals, at the same time supporting a great diversity of wildlife. This is apparent everywhere and nowhere more obvious than on the deep cushions of moss on the ground and the lichen-covered rocks and trees. 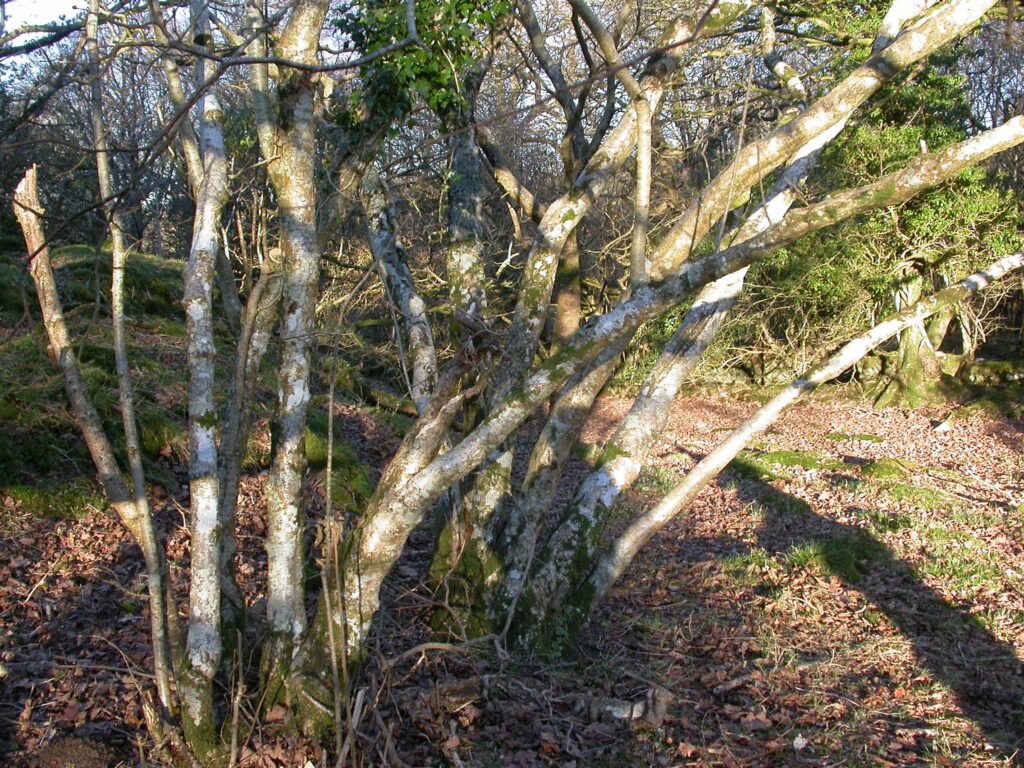 Ancient coppice stools tell us that humans have used the woodland produce over long periods of time, but Ty Canol wood has never been clear-felled, allowing many woodland organisms to survive and recolonise. The grazing has kept open some areas so that the woodland that you see now is a mosaic of open glades, small fields and woodland that we associate with wood pasture. 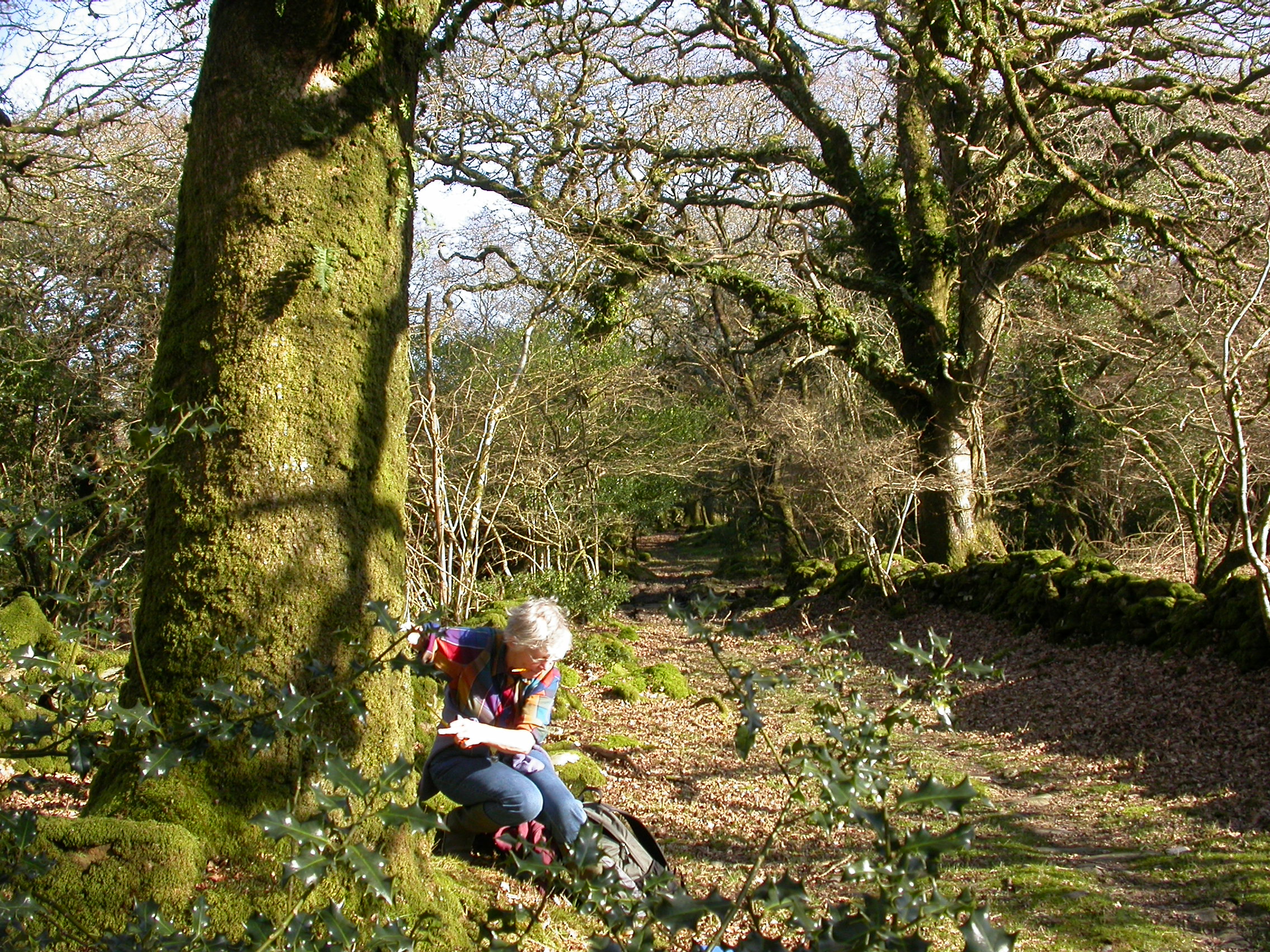 These woods have always been grazed but today’s sheep and cattle have replaced the deer and other grazers associated with the wildwood that was formerly the Bishop of St David’s hunting ground. This form of grazing was formerly common in Wales where sheep and cattle are hefted (born and brought up) in their environment and so know it well: where to find food at different times of year, where to find shelter in the winter, where to lamb or calve in protected places.

Many woods in the Gwaun valley are now fenced in and have become dominated by brambles and ivy. In other places where fields have been cleared and then abandoned secondary woodland is formed but where there is adjacent woodland lichens can colonise secondary woodland.

When a tree is coppiced, the cut stools need protecting from grazing until the new shoots are well grown. The new stems sprout from the edge of the cut stump so that over time the stool increases in diameter. Some of the coppiced stools at Ty Canol are over 3m across suggesting that they are several centuries old.

These huge stools are scattered along the routes that people have taken and at the entrance to the iron-age rath.

Other more accessible areas of oaks were coppiced more recently. On the slopes of the upper woods we cut stems in the 1970s and counted the growth rings, to find that the coppice was last cut around 1910 – a period when timber and firewood were in short supply in South Wales. The standard (single-trunked) trees were also used, as you could get many stakes as well as beams and rafters from a single oak tree and these were still being taken in the 1950s before Ty Canol was made an SSSI.

When a lichenologist called Francis Rose first walked through this wood in the 1970s he was amazed at the lichen diversity on the trees. He recorded 170 species, including the classic indicator of ancient woodland Lobaria pulmonaria or lungwort on an ash tree in the lower woods.

When I started a lichen survey of Ty Canol in 1979 both the tree and the lichen were gone, although we have since transplanted this species, but there are still many indicators of long ecological continuity in these woods. Although some lichens are associated with veteran trees, lichens are abundant on the branches as well, varying with tree species and with sunlit and shaded conditions.

Later surveys showed that there were almost as many lichen species on the rocks as there were on the trees, and that these also contained species that are characteristic of ancient woodland in Wales. Now we have recorded almost 400 species in Ty Canol NNR on trees, rocks and earth.

Lichens are symbiotic organisms composed of a fungus supported by a photosynthetic organism – an alga or a cyanobacterium. They often grow slowly so may live a long time and may not colonise new areas rapidly. When a tree falls the lichens may continue to live on the stump and the tree until the bark falls off and then another lichen community,

often dominated by species of Cladonia – including cup lichens – will occupy the rotting wood/lignin along with other lichen , fungi and invertebrates creating another species-rich habitat. These organisms are an important part of the process of returning nutrients to the soil so that is why we leave fallen trees at Ty Canol.

Lichens need light for their symbionts to photosynthesise so they are abundant on the branches of the trees where you can find many beard lichens (Usnea species) hanging from the branches in a mass of hair-like threads.

The beard lichens are lovers of rain and mist and are restricted to areas where the air is clean, but they do not often produce spores from fruiting bodies like the sun-like green discs in the picture.

The trunks and branches support many different lichens from crusts of different colours on the bark to large leafy species that glow yellowy-green. The smooth bark of hazel trees supports a special community of script lichens (the Graphidion) so called because they often resemble writing.

In winter many insects and larvae feed on lichens when there is nothing else to eat in the canopy so this is why Tycanol also supports many moths including the scarce Merveille du Jour which we observed perfectly camouflaged on lichens on a tree trunk in Tycanol.

It is this mixture of habitats, food plants and homes for wildlife that have survived over centuries that makes Ty Canol such an important National Nature Reserve.

Pat Wolseley lived and worked in Pembrokeshire for many years before leaving in 1986 to work on lichens as environmental indicators in the tropics based at the Natural History Museum in London. She has been researching lichens in Ty Canol Woods NNR since 1979 for CCW (Countryside Commission Wales) and later for NRW (National Resources Wales). She runs courses on lichens for the Field Studies Council and continues to work at the Natural History Museum as a Scientific Associate. She lives at Nettlecombe in Somerset.